March is Women’s History Month, and while there have been many amazing women involved in Esherick’s life and the history of the Museum, one that truly stands out is Ruth Esherick Bascom. Ruth, Wharton’s second daughter, was born at the Esherick farmhouse, Sunekrest, on June 28, 1922 where the walls of her childhood bedroom were covered in murals of barnyard animals painted by her father.

Ruth’s upbringing was far from traditional. Her mother Letty was interested in progressive education and longed to open up a school of her own at Sunekrest where she could educate her children and open it up to local children as well. Before Ruth was born, Letty, Wharton and their first daughter Mary spent the school year of 1919-1920 in Fairhope, Alabama at the School for Organic Education. Letty greatly admired Marietta Johnson, the school’s founder. Though Letty thoroughly studied the progressive education movement, she was never able to realize the dream of her own school. When it was time for Ruth to start school in 1928, she joined her sister at the Hessian Hills School at Croton-on-Hudson, New York; a progressive school that believed in combining study, work, play and living to teach children. You can watch a great short documentary about the Hessian Hill School here. 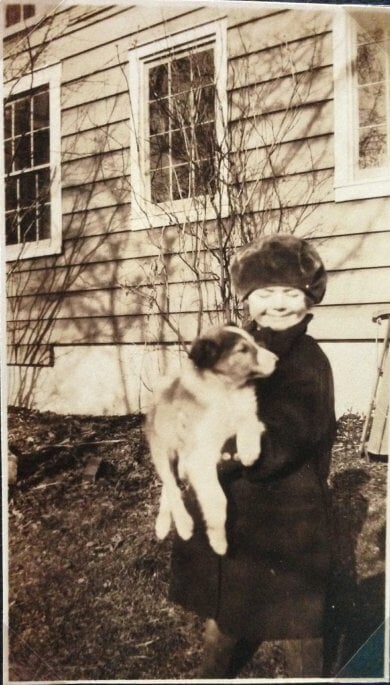 Ruth and her pup.

In order to pay for the two girl’s tuition, Letty accepted a position as housemother for the dormitory where she cooked and cared for the borders. However, one day she was found lying comatose on the kitchen floor, suffering from encephalitis and had to leave her position to recover. Mary and Ruth had to leave the Hessian Hills School.

After her treatment, Wharton moved Letty and the girls (and their two year old brother Peter) back to Fairhope, Alabama for the 1929-1930 school year so the girls could attend the Organic School and Letty could recuperate where admission was free to residents. After a year in Fairhope, they moved back to Paoli though the family did not have money to send the girls to private school, so they were enrolled in the local public schools. Ruth spent her senior year of high school as an intern at the Hedgerow Theatre and received her high school diploma there at the end of the year. She remained a member of the Hedgerow Theatre Company for 15 years. As a company member she appeared in shows, but also pulled her weight with chores and helping the theatre run. She drove the truck that brought audience members to and from the local train station, and was even commissary director for a while. She joined their board of directors as well, and was eventually named chairwoman.

After leaving Hedgerow in 1954, Ruth continued to work in theatre. She worked for Libby Holman for a while, whom she had met at Hedgerow, and also found employment designing lighting for a few off-Broadway shows. During this period Ruth moved to New York City and lived with Miriam Phillips in an apartment on Riverside Drive. In 1959, Ruth was traveling back to New York City by train when she met Mansfield “Bob” Bascom and his young daughter Halsey. The two immediately hit it off and spent time writing letters back and forth, getting to know each other from afar, as Bob was living in Puerto Rico and Ruth in New York. In 1962 they were married in Puerto Rico and began a life there together. 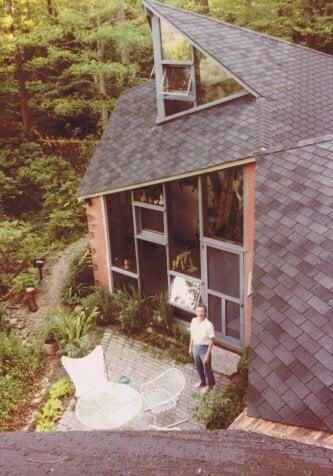 Ruth outside her home in the converted 1956 Workshop.

Fast-forwarding to 1967, Ruth became an instrumental force in preparing for the future of her father’s studio and legacy. With Wharton’s health beginning to fail, Ruth began the conversation with Wharton and her siblings, Mary and Peter, about preserving the Studio and collection. Ruth and Bob were able to purchase the Studio and property, protecting it from foreclosure, and re-mortgage the property with the understanding that someday it would all be open to the public. Wharton was glad to know this was the plan for his beloved “castle on a hill” as he called it, and on May 6, 1970 he passed away.

Ruth worked tirelessly to get her father’s Studio open to the public. In December 1971, the Wharton Esherick Museum had been officially incorporated as a non-profit organization with a governing board. Ruth was elected president of the board and held that position until 1990. In 1972, in order to better devote their life to running the Museum, Bob and Ruth moved into Wharton’s Studio and began converting the 1956 Workshop (designed by Esherick and Louis Kahn) into a home, simultaneously operating the Museum and conducting tours.

Bob Bascom recalls a story from the early years of the Museum in the Tredyffrin-Easttown Historical Society’s newsletter:

“Ruth never forgot the day she was making a dress in the studio, with fabric and patterns spread out on the big desk and her sewing machine, ironing board and a litter of snippets about, when cars drove into the property, and she suddenly remembered that a group from Virginia had booked a weekday tour. Rushing outside, she warmly greeted them while I [Bob] quickly changed from my work clothes. I then hurried outside to explain to the group in detail about Wharton, his philosophies and the exterior of the studio, all the while giving Ruth quick opportunity to put away all her sewing supplies. I finally brought the group through the door of the studio just as Ruth disappeared up the spiral stair with the ironing board. Our adrenaline didn’t return to normal until late that night.”

After her retirement from the board, Ruth continued to be active with the Museum community. She attended the annual party each year and she was always available to staff to answer questions. She was an invaluable resource and always had great stories to tell about growing up at Sunekrest and exploring her father’s studio. Ruth was always quick to make a joke and equally quick to join you in laughing at it. On October 23, 2015, at the age of 93, Ruth passed away from congestive heart failure; her presence is missed by many and visitors who once had her as a guide years ago and continue to ask after her when they visit. Ruth was an incredible woman and her hard work in establishing this Museum and preserving her father’s legacy will never go unnoticed or unappreciated.

You can read more about Ruth’s life in Ruth Esherick Bascom The Extraordinary Life and Times of an Artist’s Daughter, a special publication by the Tredyffrin Easttown Historical Society written by her husband Bob (with Roger Thorne of TEHS), which can be purchased through the Museum’s shop or online.