On the mahogany sideboard in the Wharton Esherick Museum’s main gallery sits a model, a piece that could easily be mistaken for a small abstract sculpture in itself – the model for Esherick’s Sculpture Tree.  The model is comprised of a solid three-sided base, tipped just slightly off its vertical axis, with three propeller-like shelves at staggered heights. Often passed over on tours (we have more material than could ever be covered in an hour!) the Sculpture Tree commission is well documented in a series of archived letters. This month we’d like to follow this thread and illuminate the collaboration and conversation needed to make a commission come together, and Wharton’s habit of building friendships along the way! 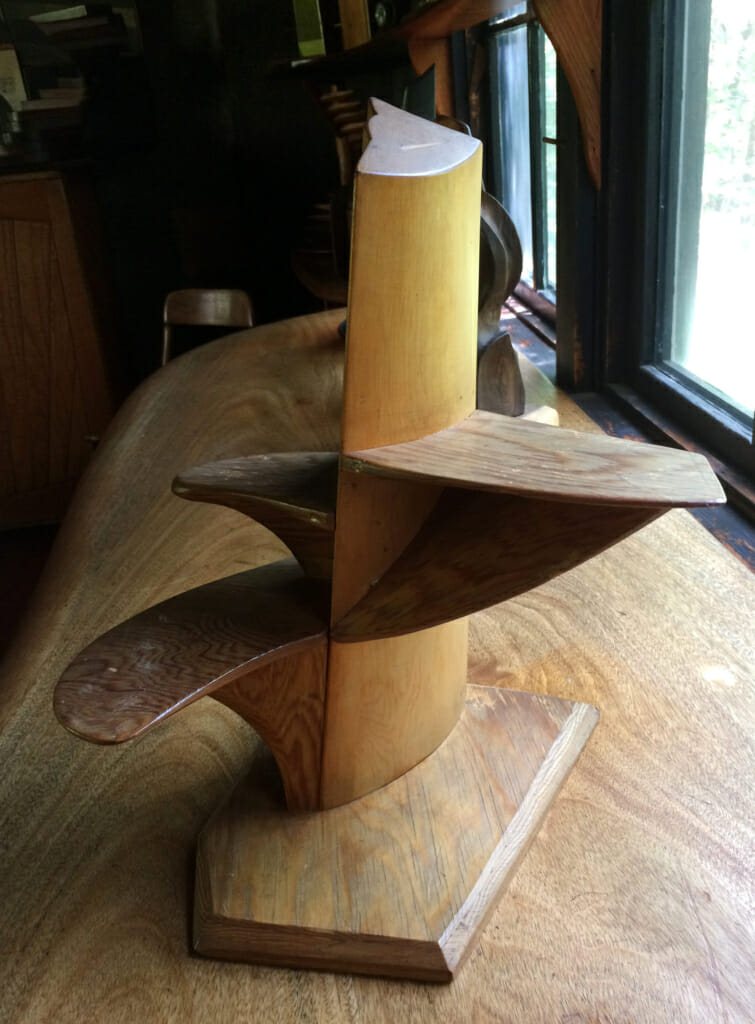 In this case, the rumblings began in 1960 with a Trustee of The George F. Little Memorial Fund reaching out to the Addison Gallery of American Art at Phillips Academy to support art and design from the domestic realm. The director at that time, Bartlett H. Hayes, Jr., had a clear interest in the elevation of craft fields and mediums in the art world, a line which was actively being blurred when this project began. In a letter to the fund trustee, Hayes stated his case (and it is interesting in itself that the case needed stating as one could take it for granted today), “A contribution could be made for the purchase of modern crafts, furniture and useful articles, exhibiting those qualities of design possessed by utilitarian artifacts of the ancient world whereby they have found their way into museums. In other words, we don’t hesitate to consider useful artifacts of the past as works of art, but somehow museums would hesitate to include the articles of the present age in this way. I think this is a mistake.”

Hayes had occasion to meet Esherick, likely calling on him at the studio to see examples of his work (though in a letter dated December 9, 1960 Hayes thanked Esherick not only for his time but “especially for the bourbon to send me on my way.”) It was Hayes who initially proposed to the trustee that Esherick be commissioned for a unique artwork. Perhaps it wasn’t too hard of a case to make – Esherick had certainly gained recognition, having exhibited at the then newly established Museum of Contemporary Crafts in New York City a couple years earlier (later called the American Craft Museum and now known as the Museum of Arts and Design). 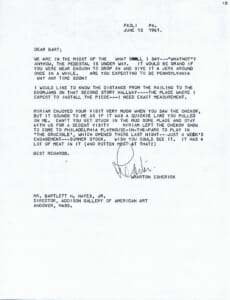 A letter from Esherick “in the midst” of the project.

With funding in place the project could begin, the task being to design a sculptural display stand for the top of a staircase, upon which potted plants or small stone and metal sculptures could be placed, something they found could best be described as a sculpture tree or plant (or pedestal, or What-Not or even ‘the CANNOT WAS’ depending on the letter you choose!). Wharton set to task making the model which now resides here at the Museum. Esherick carefully planned the dimensions of the piece, at times requesting specific measurements of the intended location. He described the flexibility with which he conceived the piece in a letter to Hayes which accompanied the model, showing an eagerness to have the piece fit naturally in its surrounding. “The base,” Esherick explained, “is a corner cabinet – one side longer than other, – it may be turned up-side-down to put the long side where wanted. Three top boards or shelves which also may be reversed, depending on where it is used.” He went on to suggest a cherry base with walnut shelves, the model, of course, being made only of pine. Wharton confessed in another letter to Hayes, “The thing that scared me a little about all this plant—sculpture multi-level figure was that I don’t want it to appear anything like those silly whatnots that we used to have in mother’s lace-curtained parlor. However, it is a nice problem…” I would say he succeeded in distancing himself from such a dainty, familiar style. According to Hayes, when the model arrived at the gallery he “found a small circle of people standing around it as if it had come from Mars.” Mission accomplished, Wharton! 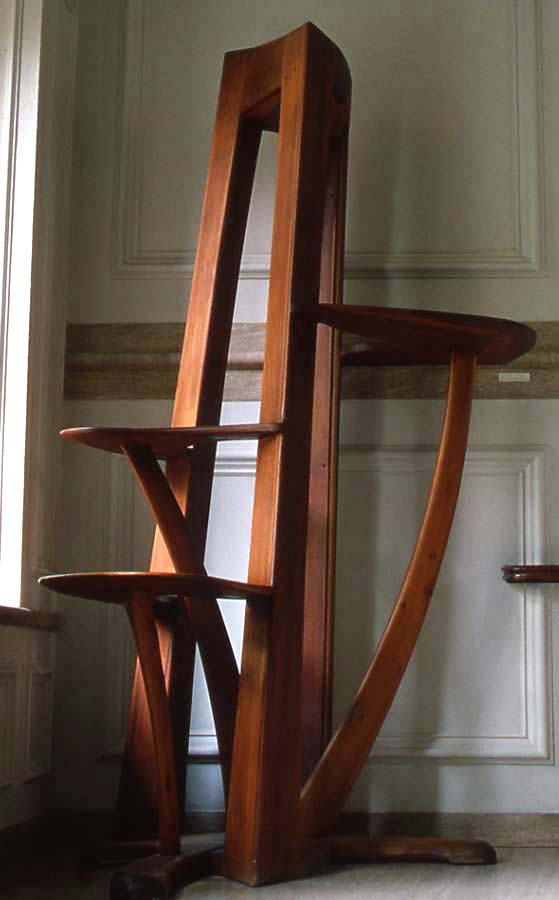 The letters between Esherick and Hayes continued and the commission evolved over time, with the final form being significantly different from the model. The “cabinet” aspect fell away, and the final wood chosen was poplar. While the silhouette of the base remained similar to the original design, Esherick removed the volume of the base (or trunk if you prefer), creating a lighter, linear form to Sculpture Tree. The letters are by no means strictly business, however. Wharton was eager to have Hayes see his other exhibitions – namely an upcoming exhibit at the Brooklyn Museum, Masters of Contemporary American Crafts. He was equally eager to invite Hayes to catch Miriam Phillips (Wharton’s dear companion in the latter half of his life) in “Evenings at Chekov” at the Key Theatre in New York or in numerous other plays at the Philadelphia Playhouse–in-the-Park. While Hayes managed to attend at least one play, it seems he was forever bouncing around to various speaking engagements leaving Esherick asking, “Can’t you get stuck in the mud some place and stay with us for a decent visit?”

With Sculpture Tree completed (which also included a patience-testing six weeks of oiling to achieve the proper finish) the final task was to of transport the piece to Massachusetts. Esherick built the piece so that it could be broken down into sections, but putting it back together again required skill and he debated going himself or sending one of his men for the install, to say nothing of whether to use a shipping company or crate the piece (he preferred not to). The solution found couldn’t be more appropriate for 1961. Hayes (who was lecturing in the Poconos) was able to swing by in his Volkswagen bus and pick up Sculpture Tree (along with Wharton and possibly Miriam too!)

Though not permanently on display, the piece remains part of the Addison Gallery collection – and you can always keep an eye out for the Sculpture Tree model next time you visit us for a tour!