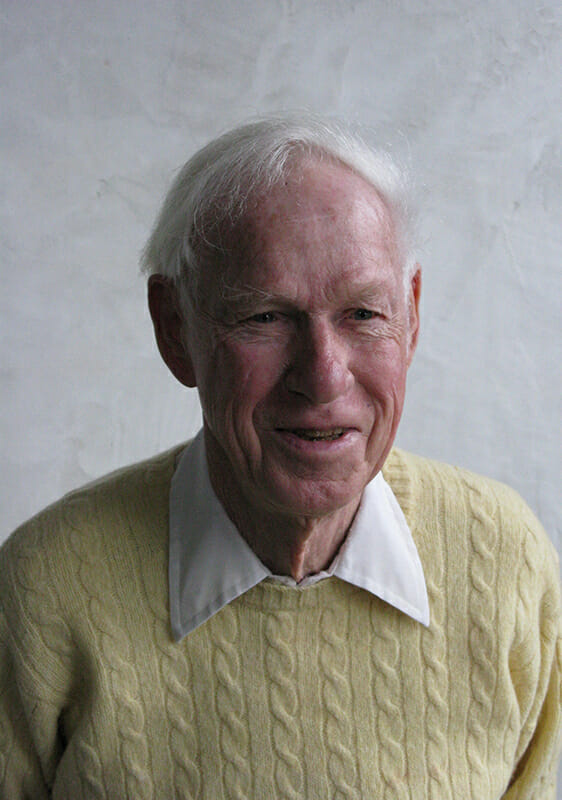 It is with deep sadness we share the news that Mansfield Bascom, Co-Founder of the Wharton Esherick Museum, passed away on Monday, October 26 at the age of 96.

Mansfield Bascom, known to so many simply as Bob, has been an unwavering pillar of dedication to the Esherick Museum and the preservation of Wharton Esherick’s legacy for nearly fifty years. Since meeting Wharton and first stepping foot in the Studio, Bob gave every ounce of his ingenuity and conviction to see the Museum succeed and promote the singular influence and brilliance of his father-in-law.

We perhaps know Bob best as a devoted husband. Ruth Esherick and Bob Bascom met on a crowded train in 1959, sharing a table in the dining car. Thanks in part to Bob’s nine-year-old daughter Halsey, the couple struck up a conversation, exchanging addresses with the promise of sharing cookbooks. As Bob would say “it was love at first meeting.” A simple but wonderful example of Bob and Ruth’s loving relationship is captured in the biography written by Bob, Wharton Esherick: The Journey of a Creative Mind, which Bob dedicated “To Wharton Esherick’s best work, his daughter Ruth.” 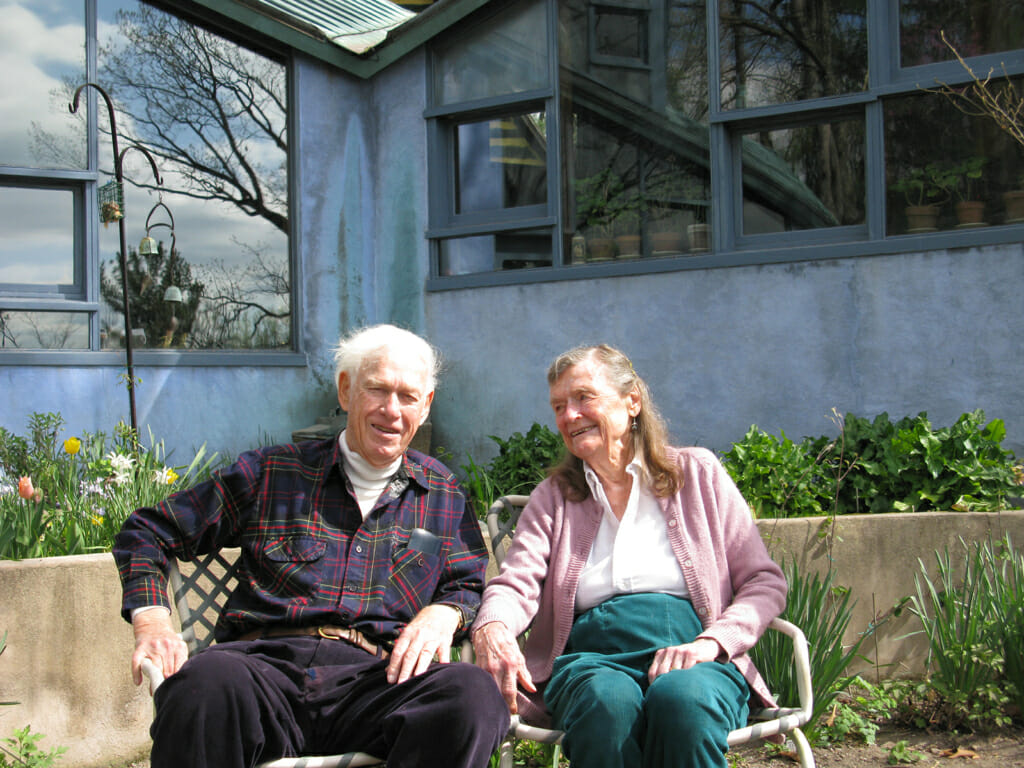 “It was love at first meeting.” Bob Bascom and Ruth Esherick Bascom were married in 1962. By 1972, they established the Wharton Esherick Museum and devoted their lives to preserving the Studio and Esherick’s legacy.

As a trained architect and structural engineer, Bob had a deep appreciation for what Esherick accomplished in the Studio and in his designs. From his very first visit in 1960, Wharton and Bob hit it off, and Bob’s reaction was instant – that Wharton’s Studio must be preserved and shared with the world.

With Wharton facing increasing indebtedness on the property towards the end of his life, Bob and Ruth purchased the then 16-acre site with the understanding that this special place would eventually open to the public, a fact they realized in 1972 with the founding of the Wharton Esherick Museum and one they poured their energy into every day thereafter.

Bob served as Director of the Museum, with Ruth serving as President, until 1990, and served as Curator until 2007. Those titles barely scratch the surface of what those early days entailed. To be able to accomplish the goals of the Museum, Bob and Ruth made this site their whole world, transforming the 1956 Workshop into their home. They cared for the site from top to bottom – from fundraising, to designing the tour program, to hacking away at bittersweet vines and shoveling snow from the steps.

Bob laid the foundation of resources that we rely on today. He developed the tour and programming with the vision to present the Studio without cases or signage, telling the stories directly instead, as an intimate experience between guide and guest. Bob established building preservation and cleaning schedules, using his own knowledge of building systems and structures. Perhaps most importantly, Bob led efforts to raise funds for an endowment, securing the future of the Museum and its collection, and our ability to promote the Museum and Esherick’s legacy with the world.

Bob did all these things, every facet and detail, with an eye toward the utmost care to preserve the quality and integrity of the site. To live out and extend as best he could the lessons imbued in the Studio. 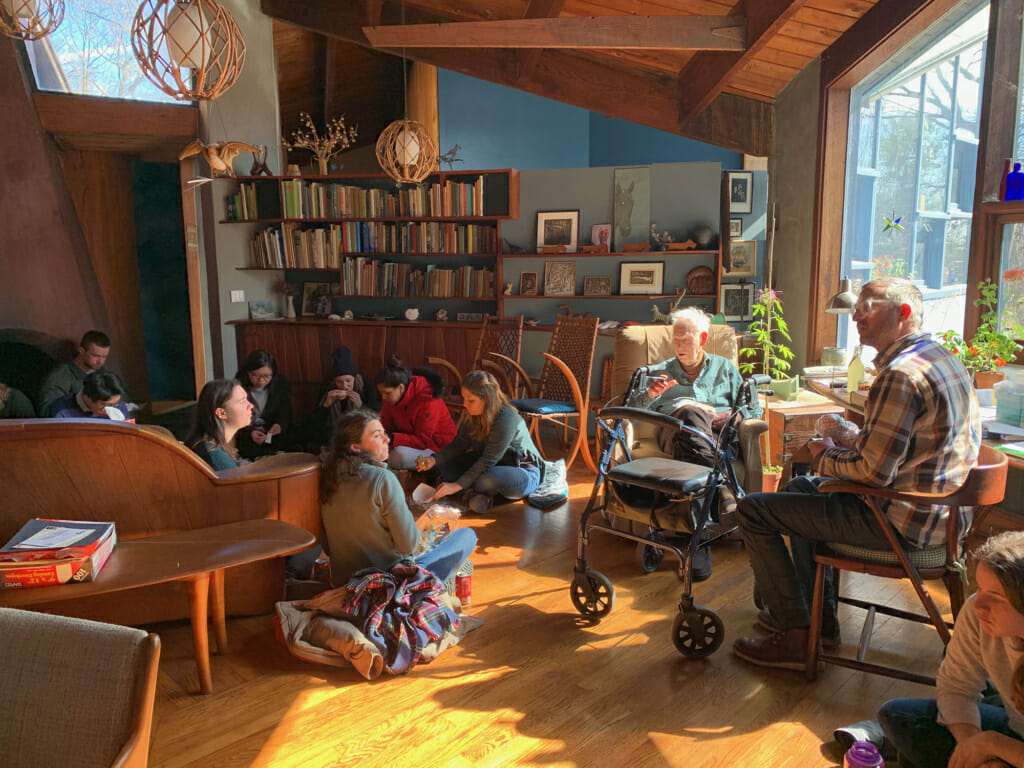 Bob Bascom hosting students from the University of Pennsylvania.

After his official retirement in 2007, Bob committed himself to the completion of the biography, Wharton Esherick: The Journey of a Creative Mind, which was published in 2010. He continued to be a guiding force in the Museum’s future and served on the Board and until the end of his life. He mentored the WEM staff and community that followed him, as a conduit of connection to the father-in-law he so deeply admired, and a strong-willed advocate for the place to which he had devoted his life. Bob’s stories and hospitality have been the cornerstone of staff and volunteer gatherings, including hosting our annual holiday party in his home, and eagerly sharing his insights with students and researchers. Bob has left an enormous and lasting legacy at the Museum and his presence and guidance will be deeply missed.

Out of respect for Bob’s wishes and given the current pandemic, there will be no in-person memorial.

We invite you to share your memories of Bob, and help us celebrate his life and legacy, on our Memorial Page here.

Mansfield ‘Bob’ Bascom was born and raised in Bronxville, NY, a suburb of New York City. He won a scholarship to the New York University School of Architecture but, when the school closed permanently, he switched to structural engineering. His studies were interrupted by World War II in which he served as an infantry sergeant with the 30th Division in Europe until wounded. He earned a Master of Structural Engineering Degree at Yale in 1948, and was employed by a local engineering firm for the design of a stadium and auditorium for the University of Connecticut. He returned to Yale in 1953 to teach structural engineering in the School of Architecture while earning a Master of Architecture Degree in 1954. Between 1954 and 1961 he oversaw extensive alterations to two major New York hotels, and construction of two 200-room hotels in El Salvador and Puerto Rico. He married Jean Polson (1925 – 1992) in 1947 with whom he had a daughter, Halsey (1950) and a son James (1954 – 1994) They were divorced in 1957.

Bob married Ruth Esherick (1922 – 2015) in 1962, and in 1963 the couple moved to Maryland. Bob worked at a Washington, D.C. architectural firm, and later joined his brother’s firm, Ocean Science and Engineering, Inc. By 1972, Bob and Ruth moved to Paoli, PA to establish and steward the Wharton Esherick Museum.