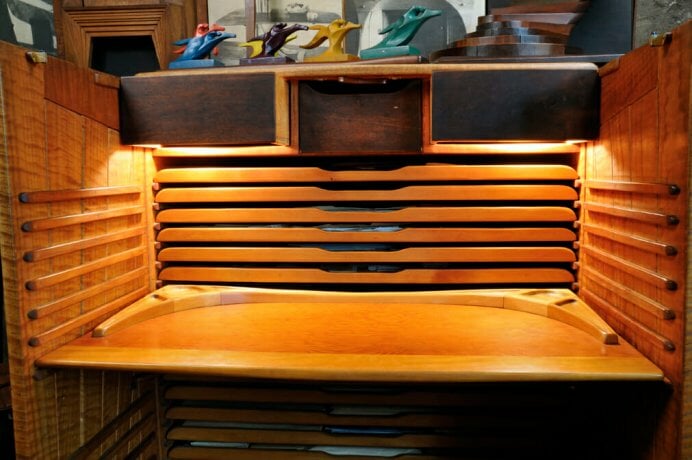 A drawer is something that most of us hardly think about from day to day. For many of us, a drawer is simply a means of storage, to put away doodads that aren’t quite ‘shelf-worthy’ but too valuable for the trashcan. But when we find something we’re looking for in a drawer, it’s like a little surprise, or sometimes a feeling of relief. And when we stash something away in a drawer, we know it’s safe and that we can find it again when needed. While also being functional, drawers can be comforting, surprising, mysterious, and dramatic – like seeing the red curtains on a stage open to reveal the bits and pieces of the beautiful set inside. It seems Esherick understood this and saw drawers as opportunities to further enhance the experience and expectations of his functional works. 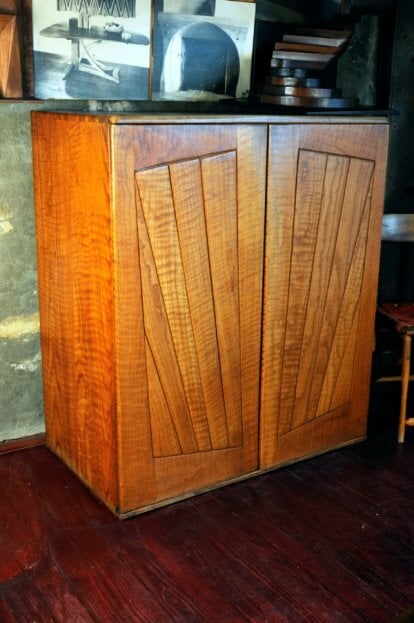 Esherick’s 1958 Cabinet Desk, a rare rectangular piece in the Studio.

Esherick’s 1958 Cabinet Desk is one wonderful example. It’s a very unassuming piece at first glance, as one of the few rectangular pieces in the Studio, but the light, curly red oak, and radial-patterned design on the doors are quite striking, which initially pulls the viewer in. There are no handles or pulls on the doors, hinting that there may be something more secretive inside, building on the sense of curiosity. Once the doors are opened, all of the flat file drawers and the “pull out” desktop are revealed, showing how truly incredible this cabinet is – and then we pull the lights out. 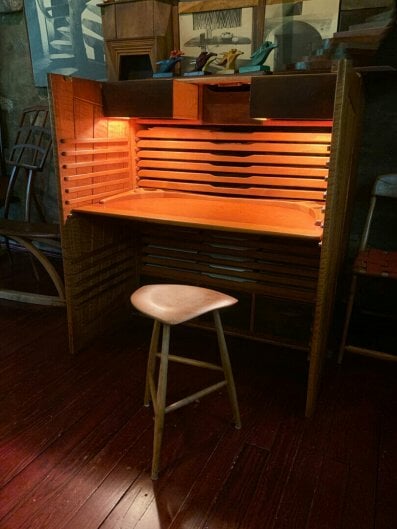 Two of the most unembellished drawers in this cabinet hold the great responsibility of illuminating everything inside; when each drawer is pulled out a hidden switch turns on a built-in light. In effect, this piece is a theatrical event in the form of furniture. While similar lighting could have been achieved by simply placing a lamp or another light source on top of this desk, it would not be nearly as elegant of a solution, or as surprising. Having lights inside of those drawers upends the user’s expectations of the whole piece, and ultimately makes this desk an environment in which the user wants to stay.

Another great example of a piece that defies expectations is Esherick’s Corner Cabinet for Marjorie Content, made in 1934. While it isn’t a part of the Museum collection, one can imagine it would elicit responses similar to those of the 1958 Cabinet Desk (oohs and aahs, mostly).  The cabinet is a very dark, brooding piece that fits snuggly and unobtrusively in a corner. There are no drawer pulls, no surface decorations, but there are piano hinges, which indicate that it does somehow open. It may appear that the sides are simply doors to hollow cabinets that sit beside the front drawers, all made to look the same for the sake of cohesion. But, like a bird about to take flight, we see the true wingspan and elegance of this piece when all of the side drawers begin to open. Lighter wood on the inside is revealed on the interior, which brightens up the entire piece. We see the curved drawers which are not only beautiful in construction and form, but also maximize the amount of usable drawer space. We see this cabinet truly come to life when the drawers are opened. 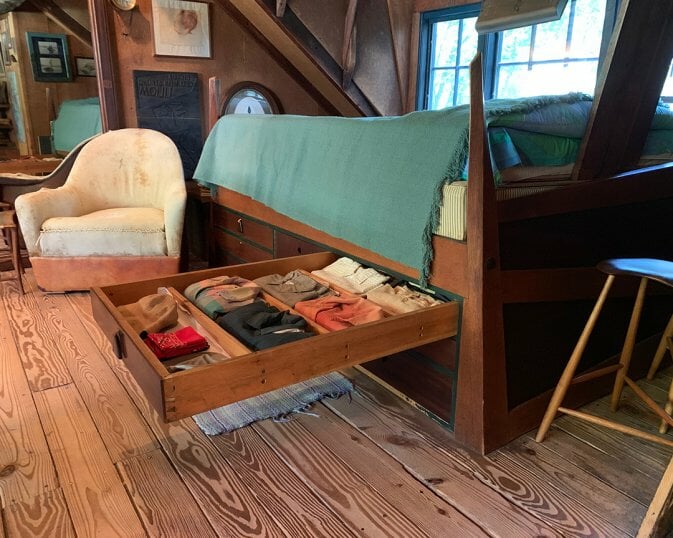 While it seems Esherick had a bit of a flair for the dramatic when it came to drawers, he understood that a drawer should also be utilized for the purposes of efficiency – and that too can be a statement. Look no further than the drawers underneath his bed for a perfect example.  Originally built in 1928, the height and placement of the bed were determined by the south-facing windows. As a result, the bed is higher than usual, making the space underneath an ample opportunity for storage. Instead of making shallow drawers, which would have left a lot of dead space behind them, Esherick’s drawers extend the entire width of the bed frame, an idea which was probably influenced by his time spent aboard boats. Pulling this drawer out on tours is very satisfying, not only because guests enjoy seeing its unexpected length, but because it runs so smoothly. It doesn’t feel delicate, but it’s also not heavy. Within the drawers, Esherick’s clothes are arranged so neatly, as if he were the Marie Kondo of his time. Formally, the drawer itself is straightforward, but it functions beautifully, and that alone makes the opening and closing of this drawer into a meaningful experience.