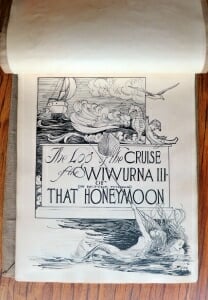 As another summer gives way to the crisp fall air, we can imagine it feels a bit like the departure date of Wharton and Letty’s honeymoon over 100 years ago.  The couple set sail from Ventnor City, NJ on the nearly three week cruise and (fortunately for us!) the happy memories of this adventure were not lost with the passage of time.  Wharton, in true captain’s fashion, kept a daily log of the journey, which we’re excited to highlight in this month’s blog post.  His chosen title, “The Log of the Cruise of the Wiwurna III: or (In Better Words) That Honeymoon”, should leave no doubt of the good humor and adventurous spirit detailed within!

Wharton Harris Esherick and Leticia Aloysius Nofer were married in Philadelphia on September 13th 1912.  Raised in differing religions (Wharton’s family were Episcopalians, while Letty’s were Catholic) meant a church ceremony was out of the question, and the couple instead turned to a friend of both families, Judge J. Willis Martin, to help them tie the knot.  It was also thanks to Judge Martin, who offered the couple the use of his motorsailer for a honeymoon cruise, that the couple would have many more knots to tie in the weeks ahead! 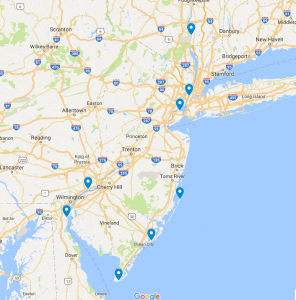 Map of places the Eshericks went ashore. Click to enlarge

Flying the Ventnor Yacht Club flag, the Wiwurna III was a “38 foot hunting cabin motor boat, run with a 12 H.P. Hall engine” and “sails with 425 square feet of canvas.” It was equipped with a cabin, toilet and washroom with electricity and carried both a rowboat and a 16 foot canoe.  The first few days aboard ship were spent puttering around the Jersey coast, getting used to the new accommodations, after which Wharton and Letty set out for New York.  Wharton details their route, passing by Seaside Park, Asbury Park, sailing around Sandy Hook, through Swash Channel, into Kill van Kull and dropping anchor at Sailor’s Snug Harbor on the north shore of Staten Island.  Hopefully the sites on land were nicer than the harbor, for this stopping point did not get a resounding endorsement from Wharton.  Rather he called it “the dirtiest and noisiest place we could be, trains ran across our stern, while tugs and liners chased under our bow.” 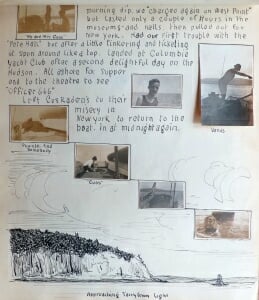 Wharton, Letty and the Cuskadens on an excursion up the Hudson River.

Once in New York they spent several days enjoying the company of friends and family (though they always returned to the ship at night!)  They visited the Metropolitan Museum of Art with friends, Mr. and Mrs. Cuskaden, ate dinner in Chinatown with Uncle Millard, and took in a few plays, notably seeing George Arliss in Disraeli.  The Cuskadens even joined Wharton and Letty for an excursion up the Hudson, spending a night aboard with the newlyweds.  Wharton’s awe at the natural beauty of this region is palpable – “…that beautiful river of Hennrick [Henry] Hudson’s discovery flowing through great cuts, making high walls on either side; and immense woods reaching out above it all.  Large palisades making the trains that run along their base seem like toys, and our little craft must have looked like a dot to these great rocks and mountains of ages. Man is only a speck to these wonders.”

It is commentaries like these from Wharton that are the most delightful as a reader returning to these pages.  During a stop in Barnegat, New Jersey, Wharton delights in the laid back store owner, too comfortable at the local hotel bar to assist Wharton in buying ice, preferring to give Wharton the key and let him get it himself. Wharton is left wondering (surely with a smile) – “is that honesty or laziness?”

On another early night in their trip, the couple awoke to the US Life Saving Service coming to offer them help (though they were not actually in any trouble).  The “rescuers” were quite surprised to see Letty poke her head out at the commotion, to which the Captain remarked “that fellow don’t need no help, he’s having a fine time – he’s got a girl on board.”

Wharton and Letty being “rescued” by the U.S. Life Saving Service.

Not every couple would have been well-suited for such a rugged outing, a trip in many ways full of duties and hard work.  However, Letty was spirited and unconventional (it is said that while other girls still played with dolls, she played with engines) and Wharton’s familiarity with sailing is apparent from page one.  The log is peppered with nautical lingo (with references to the jib, aft sail, tenders, and such) and titles (Wharton as Skipper and Letty The Mate and Chief Engineer!).  Indeed, a good portion of Wharton’s log aptly details (as it should) the wind, weather and tides and how they used these to get where they were going! 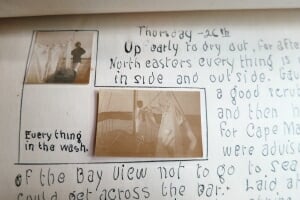 Drying out after the storm.

Wharton spent his fair share of time on the water as a youth.  His parents owned a beach house in Longport, NJ where the Esherick boys taught themselves to sail, even spending one entire summer aboard ship.  This experience must have come in handy when Wharton and Letty found themselves in a powerful storm.  Making their way back down the Jersey coast from New York, Wharton recounts how the boat was “taking big breaks and poundings like a fighter, and sticking her nose out for more, many times rolling over to put the port holes under.” They managed to battle their way through gale force winds and rain and tuck into a cove south of Barnegat, New Jersey to wait out the storm.

Crabbing near Cape May, NJ.

Thankfully, not all of their time aboard the Wiwurna III was as harrowing as those stormy nights! Wharton and Letty straightened up, dried out and headed for Cape May, crabbing off the boat, and visiting the summer resorts on shore.  The last few days of the honeymoon were spent making a leisurely push up the Delaware River, undoubtedly knowing that, with the cool October air, their trip would have to come to an end.  In fact, their last night was spent covering up with “all blankets, sweaters and rugs” – they had held out as long as they could! Letty bound the journal with linen cord and whittled sticks, so that the book could be hung like a nautical chart.

That last day, October 2nd, just shy of three weeks, Wharton and Letty “hauled out for the winter” at the Philadelphia Yacht Club in Essington, PA.  Upon returning home, Wharton copied the log in ink and lovingly brought the stories to life with snapshots and illustrations.  Letty then created a canvas cover for the pages, using linen cord and whittled sticks to bind the book, lending it a resemblance to a nautical chart and preserving it for future adventurers.