A Happy Birthday to Wharton 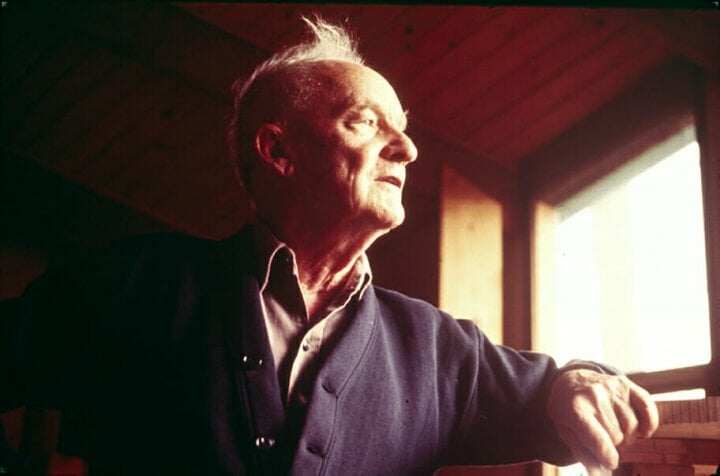 This month we are celebrating Wharton Esherick’s birthday (July 15, 1887) with a poem from his daughter Mary — whose own birthday falls just one day after her father’s — and her husband Bob White. Transcribed from the original document held in our museum archives, the poem captures Wharton’s “zest for life” — as well as a charming anecdote regarding his first words! Happy birthday to Wharton – and happy birthday, Mary!

We sing a short song to a birth…

And thru’ long years of sorrow and mirth.

When the Eshericks received a twin bundle from heaven.

The wise little girl they chose to call Dotty.

Of much about her our knowing is spotty;

Except that her voice was very soon heard,

While little twin brother said nary a word…

Until the year our Wharton reached three,

When he looked in the glass at his personal ‘me’

And said, with a smile: “Doesn’t Wharton look nice!”

In a voice quite clear and also precise.

Now the years pass, and our hero grows older.

At young people’s dances he’s quite a success

As he waltzes blonde Dotty in her bright yellow dress.

Yet, our gay young blade was no shining student.

He was wont to be more feisty than prudent.

But his skill as a draftsman helped him to ‘pass’,

And he also drew tests for his hand-awkward class.

And now we move on to a budding career

Which his family regards with some pride and some fear.

For where are the guide-lines, slide rules or charts

For any bright youth in search of the arts?

Could it have been Pop’s workbench inspired

To work in the arts, the love of his life –

At the fine arts school he found magic in paint:

Soon he gave rein to his towering notion…

Of setting down nature in still and in motion.

His subjects were mountains and men and their trees.

Before many years, he found that of these

‘Twas the towering oak that held him in thrall;

To sculpt of its wood… that was life’s all!

And so it has been… and the years add by the score;

Bring dollars and fame and, oh very much more!

Art lovers and critic of many a land

Cherish the fruit of his dexterous hand.

So now on this day in the midst of July –

We will not say it, in this year of our Lord;

We’re too proud to be bound by invisible chord

Of affection and blood, and also too few… The birthday poem for Esherick in our museum archives; Esherick in the workshop circa 1965.

Explore the Finding Aid for the Wharton Esherick Family Papers.