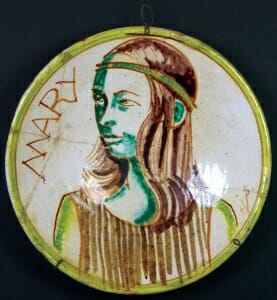 Guests to Wharton Esherick’s Studio see his daughter Mary’s likeness in each and every room. The Actress, carved by Wharton in 1939, was inspired by a photo of Mary in her dressing room backstage at the Hedgerow Theatre. In the dining room, we see her young face on family portrait plates by Wharton’s friend and fellow artist, Henry Varnum Poor. Other times, as in the bedroom, we see photos and drawings of Mary and even textile projects she made as a child. Each item points to an adventurous, bohemian life that began surrounded by art and the outdoors.

On July 16, 1916, Mary was born at the Esherick farmhouse, “Sunekrest.” Wharton and Letty had suffered greatly with the loss of an infant daughter, Jane, the year before, and the arrival of the healthy, happy Mary must have been their great joy. Wharton and Letty had moved to Paoli to embrace an organic life, close to nature, which meant an experimental upbringing for Mary and her siblings who would soon come along (Ruth born in 1922 and Peter in 1926). Ruth would later describe Mary as, “a true flower child…she preferred nudity, hiding in the woods rather than dressing for Grandmother’s visits.” 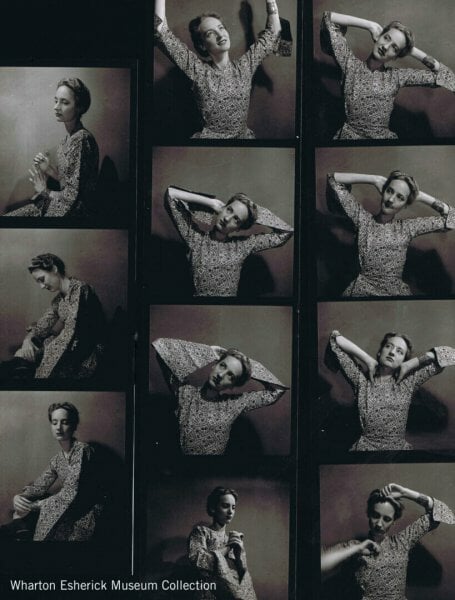 The Esherick’s took a non-traditional approach to education. Letty was particularly interested in the progressive ideas of Marietta Johnson (a contemporary of Rudolf Steiner and Maria Montessori) who founded the School for Organic Education in Fairhope, Alabama. In 1919-1920 the Esherick family (at the time just Wharton, Letty, and Mary) spent the school year in Fairhope, Letty studying the school’s approach. This would be the first of many creative communities in Mary’s life. Upon returning home, Mary would be homeschooled by Letty and begin spending summers in the Adirondacks at the Gardner Doing Dance Camp in Lake Chateaugay, NY.

By 1925, Mary began attending the Hessian Hills School in Croton-on-Hudson, NY. She was one of five students when the school was founded, and her tuition was paid in chairs designed and built by Wharton. As the school grew, her mother and siblings joined her. Letty worked as a housemother for all the boarding students, but sadly, this role was cut short when Letty was hospitalized for encephalitis. 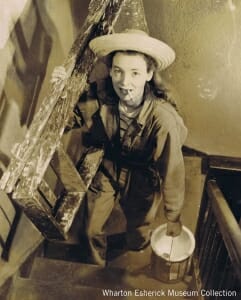 The illness threw the family for a loop and Mary bounced between the Hedgerow Theatre for the summer, Fairhope, AL for the 1929-1930 school year, and then back to the Hessian Hills School. Finances running low, she and her siblings were then sent to public school, but Mary was unprepared for the rigid structure of traditional schooling. At age 15, Mary left school and returned to the Hedgerow Theatre to live and work. Mary acted in dozens of plays over the next several years at Hedgerow and learned the ins and outs of theater,  including lighting, costuming, props and stage management. Ruth and Letty would move there as well in the late ’30s to live and act as part of the company.

Comfortable with the stage and travel, and looking for a new adventure, Mary joined the Ringling Bros. Barnum and Bailey Circus as a showgirl for their 1941 season. In a diary she kept that year, Mary describes the chaotic hiring day in New York City, where she was ultimately picked as one of a dozen young women out of the 50 or 60 that responded to the ad. Before heading by train to the circus’s winter quarters in Sarasota, Florida for training, the girls chose bunkmates. Brooke Carlyle, Mary’s bunkmate, later recounted that Mary was “as unpretentious and honest a person as I’ve ever known. She was thin, too, which was a great advantage in a bunkmate.”

Mary was primarily involved in three different acts for the Circus. For “Old King Cole and Mother Goose,” a number created entirely by Norman Bel Geddes, she dressed as a child’s building block, and in another, she and her fellow showgirls danced as cats to choreography by Albertina Rasch while the more experienced performers were on swinging ladders above them. The third act Mary performed in was a patriotic number (with the U.S. on the brink of entering World War II) that involved the showgirls climbing a net of 40-foot-high rope ladders to a medley of “Somewhere Over the Rainbow” and “The Stars and Stripes Forever” while four huge American flags unfurled to close out the show. Though the actual performance used sturdier steel cable ladders, training in Sarasota took place on rope ladders, which swayed in the air. In her diary Mary recounts the training, “Mr. Consello keeps saying ‘if you get tired, come down. If you get scared, swallow and go on up. If you get tired, come down.’ He had to come up and get 1 girl this act because her arms got tired. 2 girls still haven’t gotten all the way up.” Brooke Carlyle even remembered how “waiters gaped as we finished our breakfast, requested vinegar if it wasn’t on the counter, poured it over our hands, shook on some salt, and rubbed. It worked, too, and we built up beautiful callouses.” 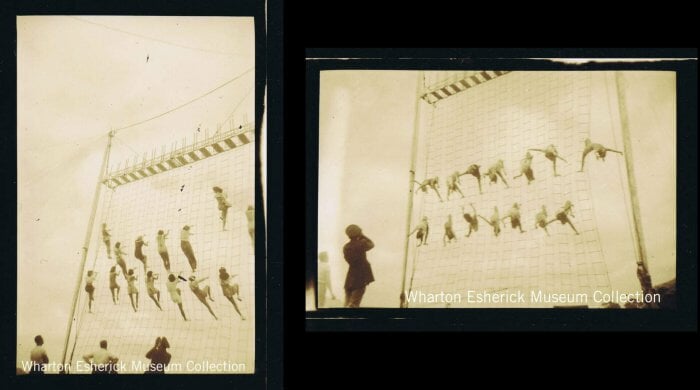 After her season with the circus, Mary put her theater skills to work, taking numerous jobs in stage lighting. Notably, she supervised lighting for a tour featuring Josh White and Libby Holman, who were among the first mixed-race male and female artists to perform together, and both active in the civil rights movement (Holman was also well-known after the suspicious death of her husband). Mary’s sister Ruth also worked for Holman on tour as the stage manager. Sadly, during a summer stock performance in the Catskills, Mary suffered a fall while adjusting a spotlight, shattering both her feet. She had difficulty walking for the rest of her life. 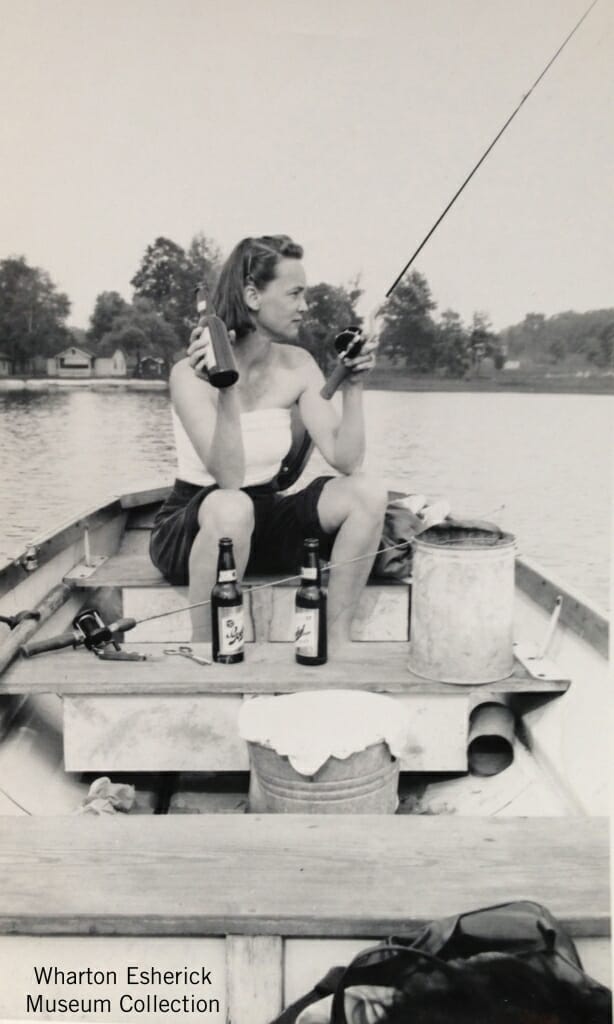 Not long after the accident, Mary married Robertson ‘Bob’ White, an aspiring actor and writer. White may be most remembered for the radio show ‘Deadline Drama,’ though he also wrote for television, and landed acting roles when he could. He had small roles in the television shows ‘Flipper’ and ‘Gentle Ben,’ among others. Mary and Bob lived in New York briefly before moving to Florida, making ends meet with various jobs in realty, travel booking, and other fields, for the next 30 years. After Bob died in 1985, Mary returned to Pennsylvania, to an apartment in the Roxborough neighborhood of Philadelphia. Before she passed away in 1996, Mary moved back to the Esherick farmhouse, “Sunekrest”, able to spend the last year and a half of her life in her childhood home.