In light of the exhibition “Wharton to Wendell” at the new Modernism Museum Mount Dora in Florida, celebrating the work of Wharton Esherick and Wendell Castle, we decided to look back at Wendell’s remarks about Wharton’s influence on his work.  Wendell Castle a guest speaker at our annual member’s party thirty-one years ago and his remarks were recorded in Fall 1992 edition of The Quarterly: 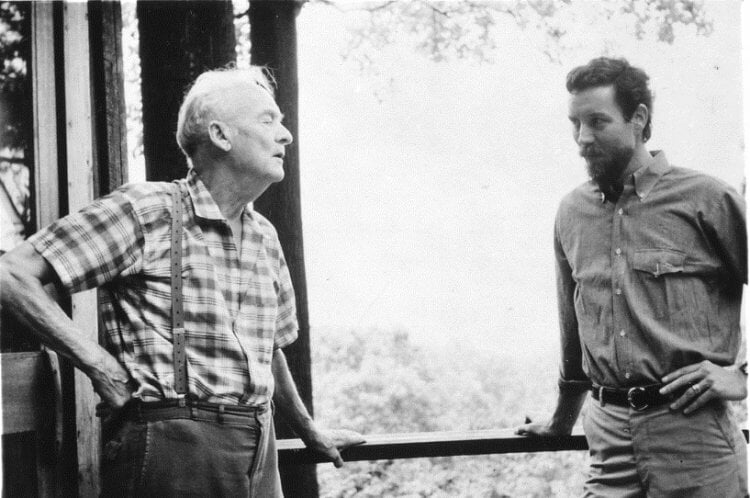 Thank you, Tom [Hucker], for those kind remarks.  It certainly is a pleasure to be here.  At a time when cynicism and despair and indiscriminate recycling of tired ideas from the past seem to dominate what’s going on in the art world, it is particularly wonderful to be here.  It is so refreshing to see honest Yankee ingenuity and all those kind of wonderful things. I wonder as I sit here what I might be today if I had never come here. I don’t know what I would be. I wouldn’t be what I am – I know that.’

In 1958, while a student at the University of Kansas, I discovered Wharton Esherick’s work in a book called ‘Shaping America’s Product’, written by Don Wallace.  In addition to Wharton Esherick’s work being in that book, Sam Maloof’s work was in that book and so was George Nakashima’s.  But only one of them interested me, and I was just fascinated with what Wharton’s work looked like and what little bit the text said.

In the spring of 1958, a roommate and I made the journey from Kansas to visit relatives in this area and in the area of Roxbury, Connecticut. I remembered that Wharton Esherick lived in Paoli and that Alexander Calder lived in Roxbury. We knocked on Alexander Calder’s door and told him we were art students from Kansas, and he said come in. He showed us around and we had a great time and it was a very interesting experience.

A day or two later we arrived here. I don’t know how we ever found this place, but somehow we did and knocked on the door here. Well, Wharton Esherick wasn’t particularly interested in talking to us. He was busy. So, we went away.  I only had a word or two, so I would like to refer to Wharton Esherick as my reluctant teacher. But that experience and seeing the studio – what I could see through the windows and what I could see of the house from here – was enough. That was way more than enough.

Ten years later, Don McKinley and I came together, and it was a wonderful and memorable visit on a day as beautiful as this. We sat on that beautiful patio, and we had lunch and talked about – I don’t remember what. It was a very meaningful day. Wharton didn’t seem to be one to want to get into profound statements about art or ideologies or philosophy, so we had rather ordinary conversations. We talked about making things, we talked about ideas, and we talked about tools and all kinds of wooden things.

But I think that from the early experience of having just seen this place and then having started my own career in art and coming up with a lot of the ideas that I came up with, I think that in many respects I share those thoughts that Wharton had, and many things that I consider to be important in my work were important in his work.

I made a list of ten things that I think I got from Wharton Esherick even though he never was my teacher. I learned more from him than most teachers I ever had class with.

Number One: I had no idea you could make furniture by hand and sell it and get paid for it. You know I didn’t know that was a possibility.

Number Two: I had never thought that furniture had expressive qualities, that furniture could have all of the kinds of qualities that painting and sculpture had. It had passion. It had presence, and it could be narrative. That directly came from Wharton Esherick’s work.

Number Three: furniture can actually be art – not just be like art, or something related to art – it can be art.

Number Four: the fact that art and life are one. And this is certainly a living example of that, this environment Wharton made for himself. He lived with art. He was around art all the time and there was no separating. He didn’t go to work and come home from work. That was all the same.

Number Five: furniture is not a minor art, that furniture is as major as any art and it can make as important a contribution to any art movement as anything can and be absolutely just as legitimate.

Number Six: the essence of an idea in a piece is far more important than the skill or the craft or the quality of the material that goes into it.

Number Seven: these ideas for furniture are best arrived at from anywhere but getting them from furniture. Wharton didn’t borrow [ideas] from the history of furniture – he made them up.

Number Eight: I was very impressed with the fact that Wharton Esherick had power tools in his studio and I thought craftsmen made things all by hand.

Number Nine: the importance of drawing. Drawing makes it possible to keep ideas so they don’t go away. Thoughts are fleeting. Ideas on paper are not.

Number ten is really that all of these ideas add up to one big idea: the importance of creative thinking, of good old Yankee ingenuity.

I would like to end this with ten ideas of my own about creativity. Sort of ten adopted rules of thumb that I like to use on a day-to-day basis in dealing with my own work:

One: If you’re in love with an idea, you are no judge of its beauty or value.

Two: It is difficult to see the whole picture when you are inside the frame.

Three: After leaning the tricks of the trade, don’t think you know the trade.

Four: We hear and apprehend what we already know.

Five: The dog that sits on the porch will find no bones.

Six: Never state a problem to yourself in the same terms it was brought to you.

Seven: If it is offbeat or surprising, it is probably useful.

Eight: If you do not expect the unexpected, you will not find it.

Nine: Don’t get too serious.

Ten: Most importantly, it you hit the bulls-eye every time, the target is too near.

I think Wharton Esherick had his targets way out there. He was shooting great distances.

Thanks, everyone, for allowing me to be here today to celebrate this twentieth anniversary of this wonderful Museum.

You can also check out Wendell’s work at www.wendellcastle.com.