On each visit to Wharton Esherick’s Studio, you will undoubtedly see an open drawer or cabinet filled with Esherick’s belongings. The furniture in the Studio is used for storage and filled with documents and photos, old correspondence, and even ephemera like long-distance calling guides and typewriter eraser wheels from Esherick’s day. The Studio continues to feel lived in, with the odds and ends, evidence of a life well-lived, peeking out of every available space. It’s no surprise then, that every once in a while we come across a new treasure that has been tucked away for far too long. Our latest find, discovered among the many archival boxes in Esherick’s bedroom closet, is Wharton Esherick’s longest drawing, a scroll of sketches that extends over 25 feet in length.

The fireplace at Sunekrest features among the sketches.

The scroll begins with a child and a cat around a Christmas tree — which in the next scene is tossed out the window — and continues with a series of playful cartoon vignettes. Each image depicts the comings and goings of life at Sunekrest, the farmhouse where the Eshericks began their life in the countryside.

Esherick’s bandsaw, made from oak, walnut, and two bicycle wheels.

Without more context, we know very little about this object. We can only speculate how he came to have such a long paper — perhaps friends at the Centaur Press gifting him a little extra run of unprinted pages? — or even why it came to be. It could have been for the simple fun of filling up such a long page, or maybe this was an evening’s entertainment in which Esherick added scene after scene to recount stories of their country home. The drawing is undated; however, thanks to the depiction of a few familiar objects and events, we estimate the drawing was made around 1927.

Esherick’s homemade bandsaw of oak, walnut, and two bicycle wheels appears among the sketches. Crafted by cabinetmaker John Schmidt, who worked closely with Esherick for many years, this DIY tool was a major addition to Esherick’s Studio in 1927. The jockeys on horseback from The Race, the sculpture inspired by a game for Esherick’s children dated from the early 1920s, also appear towards the end of the scroll. 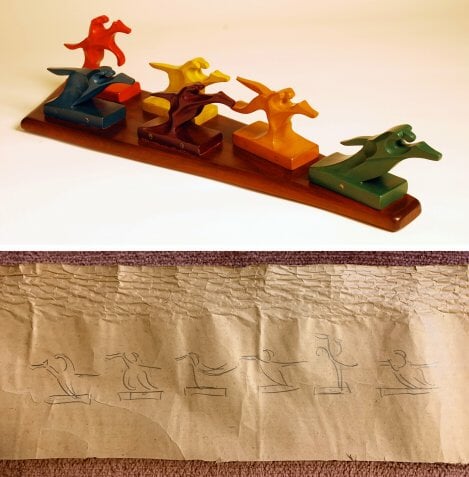 The Race, an early sculpture by Wharton Esherick, began as a game for his children.

Esherick’s wife Letty is also featured in the drawing, pregnant with their youngest child, Peter, who was born in February of 1926. We see Letty again at her loom, perhaps weaving fabric for the pillows that now rest in the Studio bedroom. Esherick’s daughters Mary and Ruth make an appearance too, of course, on tricycles and sleds, surrounding the farmhouse table, or sitting on the bench that now resides in our Visitor Center.

If this long drawing has one theme, it’s that life at Sunekrest was robust: full of winter sports, mischevious cats, woodcarving, sawing, pancakes, and living close to nature. Esherick drew each vignette with just a few confident marks, yet each captures his humor and warmth and provides glimpses of Esherick’s early life for us to enjoy. 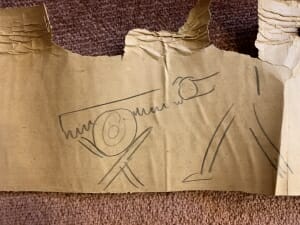