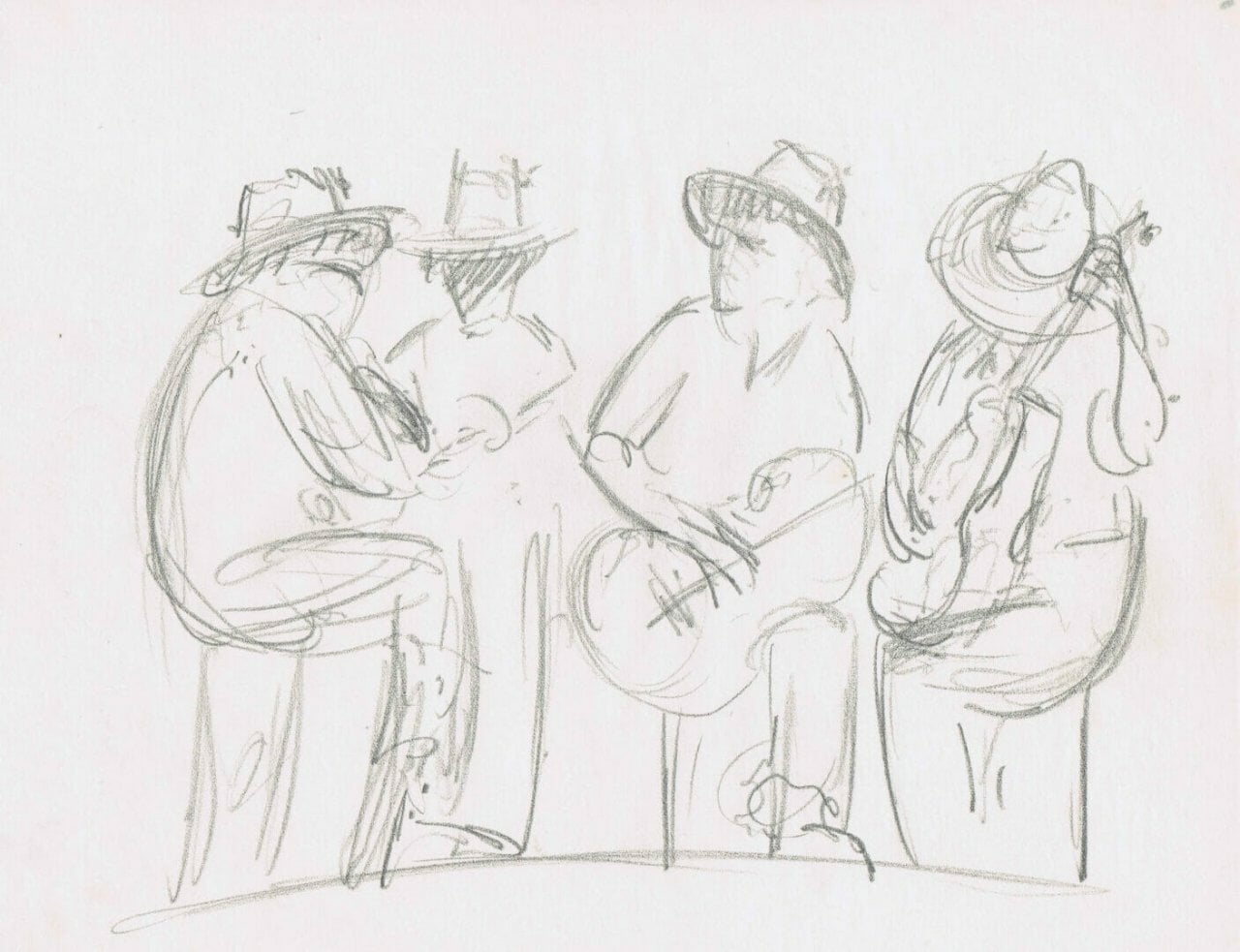 One of several sketches of musicians in Mexico, Wharton Esherick, 1947. 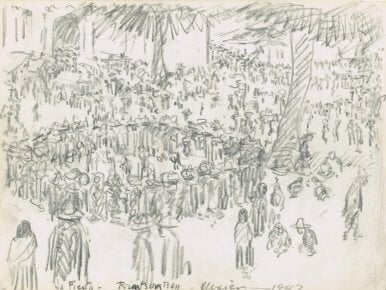 Wharton’s sketch of a fiesta in Tsin Tsun Tsan, Mexico, known for it’s Day of the Dead festival.

Wharton Esherick was an artist who drew avidly throughout his life. He drew the rhythmic dancers at Lake Chateaugay. He drew the actors at Hedgerow Theatre. He drew the farmers plowing Chester County. And in 1947, when Miriam Phillips and Wharton, just shy of his 60th birthday, set out on a road trip through Mexico – well, he drew that too. It’s a trip that we seldom have reason to highlight on tours, with so many other stories and connections at hand in the Studio. Of course, we can only speculate on how this trip would inform Wharton Esherick’s work. There aren’t straight lines (how appropriate for Wharton) between this trip and his output, but as someone ever sketching, ever observing, Esherick must have pulled the sights and surroundings in, and absorbed them.

Picking up the trail from the loose pile of sketches that remain, we can piece together a journey that took Wharton and Miriam through the southern United States and Mexico as far south as Mexico City. The earliest sketches from this journey begin around Fairhope, Alabama, a progressive community that had changed the course of his life, exposing him to new artistic mediums and lifelong friendships. In a letter to a friend (Rose Kamper) many years later he referenced this stop in Fairhope on their way through to Mexico, “…saw Gaston at the newspaper office. I saw then that the town was changed.” The following sketches place Miriam and Wharton in New Orleans, Galveston, and Corpus Christi, among other towns, as they traveled along the coast and across the border into Mexico. 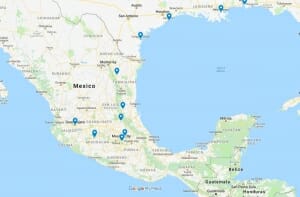 Map of places visited by Wharton and Miriam (click to enlarge)

Thankfully, Wharton noted the town in the corner of many of his drawings. Texas, Valles, Guadalajara, Mexico City. Other times, drawings are labeled with an appropriately transient, ‘On the road – Mexico.’ His subjects varied widely, from the cathedrals, tent shows, and mountain ranges to peddlers at the marketplace and women washing clothes by a stream. Not unlike Wharton’s drawings and woodcuts of Pennsylvania farmers or Cape Cod fisherman, it’s easy to imagine Wharton observing with excitement and admiration the daily lives of Mexicans as he and Miriam rolled along.

Left – ‘Patzcuaro, at the marketplace’; Right – sketch from the roadside, Wharton Esherick, 1947.

‘View from the Pyramid of the Sun, Teotihuacan’ might be the most tantalizing label. Wharton at Teotihuacan – a notion that reminds us that Wharton Esherick wasn’t quite the hermit that his studio in the woods might have us believe. Was this Wharton and Miriam’s ultimate destination? Several sketches made this day show details of the ancient architecture, as well as peddlers and local figures drawn to the much-visited site.

1947 is the year Wharton added two small, efficient spaces to his Studio – the bathroom near the entryway, and a truly modest kitchen above. (For those of you counting, that’s 21 years with just an outhouse; those winter trips to the outhouse must have been losing their charm!) The kitchen addition, too, meant Wharton no longer had to go outside and re-enter at the basement level to access the original small kitchen. This 1947 addition would change entirely with the addition of the 1966 “silo” kitchen that visitors see today, but souvenirs from the trip to Mexico can still be found.

Wharton may well have had his plans in mind to build out this kitchen, with this trip providing a great opportunity to outfit the new addition. Prominently displayed on the curving lipped shelves that wrap around the corner into the kitchen are a dozen or so beautiful blue and twisting hand blown Mexican glasses. Mexican pottery dots the kitchen and pantry, too. Wharton actually used the terra cotta cooking pots which now hang as decoration above the stairway. This drawing by an unknown Mexican artist hangs in Wharton’s bedroom.

Up in the bedroom, a large pastel drawing of a rooster provides one more link to Miriam and Wharton’s trip to Mexico. This drawing (well, a copy actually, as the original became too brittle to remain on display) was completed by an unknown artist, likely a folk artist, and captures one of the quintessential folk themes, the rooster, in broad, confident, sweeping lines. We can’t help but wonder if Wharton shared with this artist any drawings of his own!