The Perfect Plum and Other Preservation Projects at Esherick’s Studio 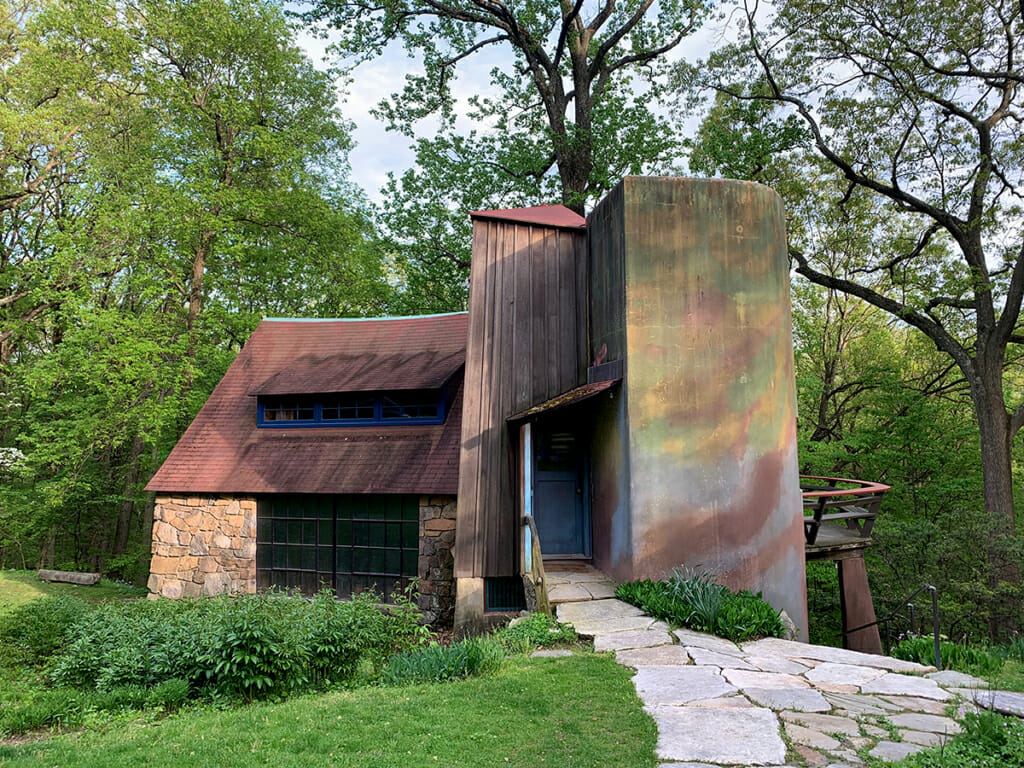 To Wharton Esherick, the Studio was an autobiography. If you wanted to know him, you had only to come to the hillside and see what he created here. Esherick felt that his personality and spirit comes through best not in words but in the presence of the materials he chose, as well as the way he organized, created, and crafted the world around him.

This is an unusual autobiography. One that stands out in the wind and rain, and sunshine too, with an average of 5,000 visitors climbing its staircases each year. Wholly individual in its design, the Studio requires an individual approach to each aspect of its preservation and maintenance; this is both a joy and a challenge for our Preservation Director Andy Gustine. While we were closed this summer, Gustine, along with his right-hand man Michael Biddison, were able to complete a number of projects on our preservation to-do list. They approached them with care, melding material considerations with an aesthetic sensitivity to Esherick’s intentions.

One of our summer projects involved repairs to several windows. The south-facing dormer window, by which Esherick placed his bed, looks out over the hillside. This steep terrain makes caring for the window a bit of an adventure. With scaffolding in place, the window casing was scraped and sanded, and inspected for decay, with losses patched as needed. The window was reglazed and freshly painted its rich, dark blue. Andy and Michael also took time to gently scrape and brush the moss and lichen off the asphalt shingles on the north side of the roof, and replace several broken slates from the southern side. 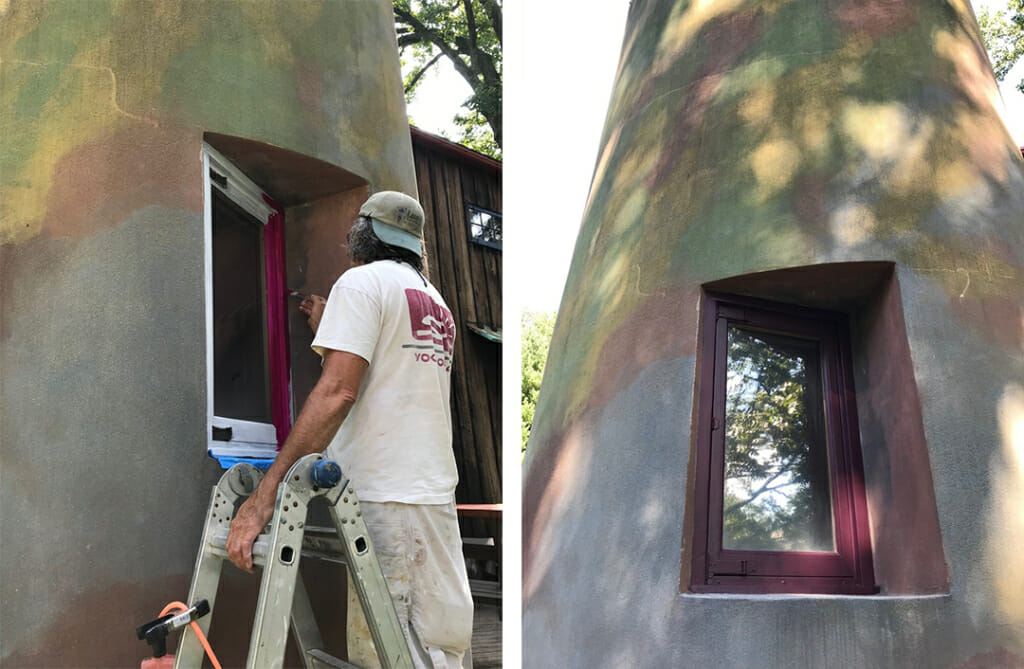 Esherick approached his casement windows more like a canvas, using multiple layers of colors to create the final hue.

The three windows on the silo proved to be in better physical condition, but an interesting discovery was made here regarding their color. During recent years, and recent coats of paint, the color had migrated away from Esherick’s original choice of plum (known to be a favorite color of his) to a bright magenta. Esherick treated his casement windows more like a canvas, achieving the original plum color through multiple layers of paint. The magenta, we discovered, was just one of Esherick’s layers. Fortunately, Esherick’s son-in-law Bob Bascom, who served as WEM’s Director and Curator in our earliest years, was able to direct Andy to an example of the original plum color on the back of the Studio kitchen door shutter. While handy in the event of a big storm, the shutter was designed by Esherick primarily to safeguard his house when he was away on a trip. He rarely used it, however, as he quickly realized it was a big signal to others that he wasn’t home! Tucked safely out of the elements, the shutter still has the original paint job without weathering and provided the match for the silo windows. 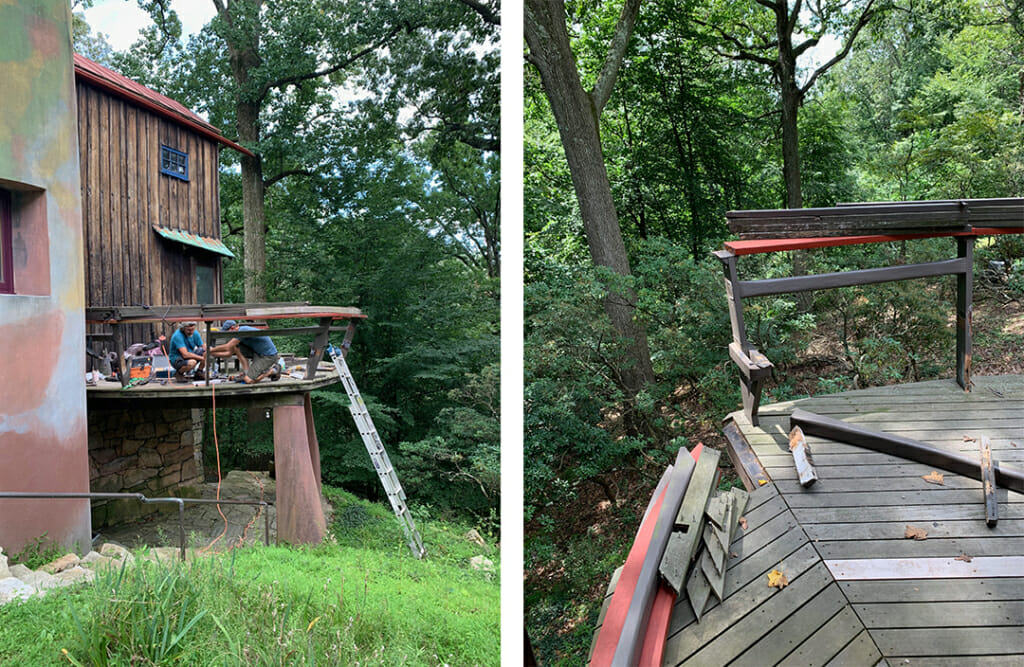 Andy Gustine and Michael Biddison repaired and replaced sections of the deck this summer. Esherick’s deck had been rebuilt once before, in 1997.

Perhaps the most intensive repairs completed this summer were made to the freeform deck Esherick added to his Studio in 1965. Rebuilt once in 1997, the deck boards, bench, rails, and posts were all due for a serious inspection. Portions were removed and replaced as needed with western red cedar, with one exception: the two posts were replaced with African Sapele, a strong and decay-resistant tropical hardwood, well-suited to withstand the elements. Sealant and other treatments were used to mitigate future water damage at the joints. Andy was also able to bring the color of the deck closer to Wharton’s original intent. A piece of the original deck saved from the 1997 reconstruction was used to create a color match, showing a slightly warmer, richer tone of brown than had been applied in recent years.

A new roof on Esherick’s woodshed should last for decades to come!

One final project of the summer involved Esherick’s woodshed, which still keeps the rain and snow off stacks of lumber out behind the Studio. This was given a new corrugated, coated galvanized steel roof in an evergreen color, replacing the existing asphalt roll roofing that had reached the end of its life (okay, and then some!). In keeping with both the simple functionality of the woodshed and the rustic nature of the structure, this new roof will keep the boards – and the replica of Esherick’s Expressionist outhouse — dry for a few more decades to come!

Of course, preservation work is an ongoing task as evergreen as the woodshed’s new roof. This fall Andy is continuing to work on the Studio windows, delving into research on the Pella brand Esherick chose for both additions, and continuing to ensure Esherick’s Studio remains vibrant, alive, and true to his spirit. 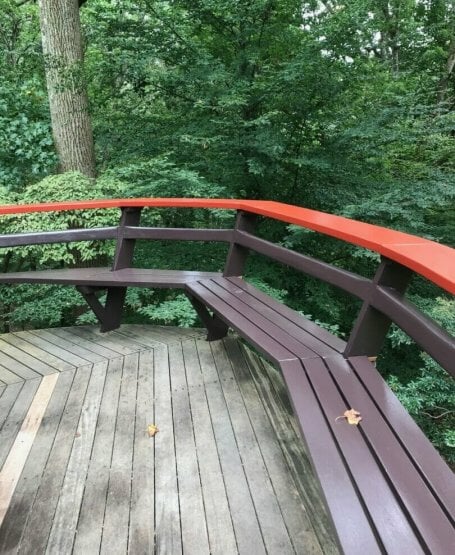 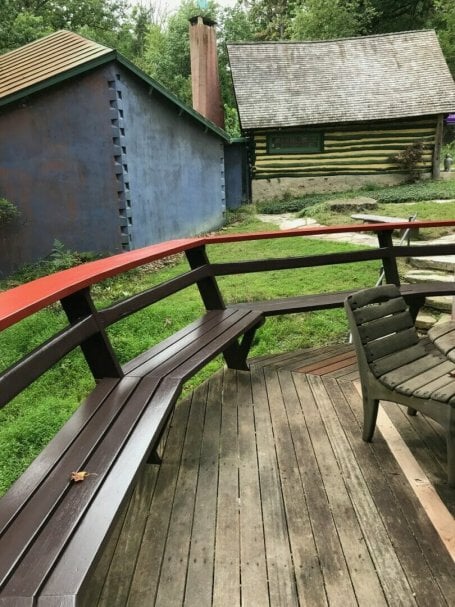 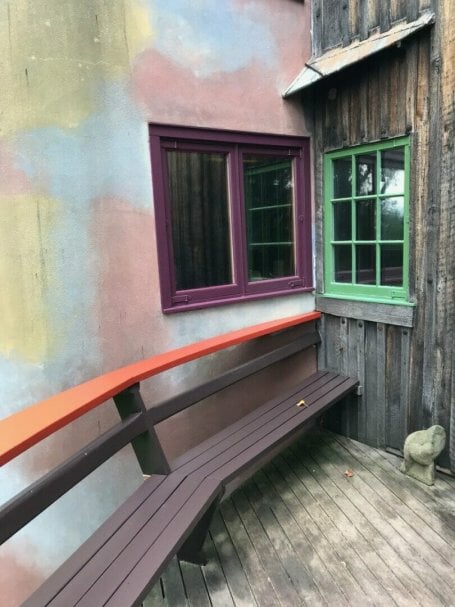