The Artist, the Poet and the Centaur: Wharton Esherick & Walt Whitman 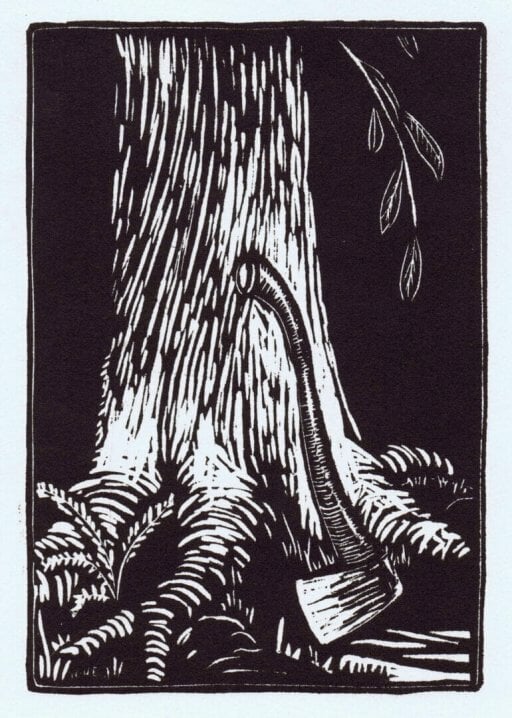 “The beauty of independence, departure, actions that rely on themselves,

The American contempt for statues and ceremonies,

the boundless impatience of restraint,

The loose drift of character, the inkling through random types, the solidification;

The butcher in the slaughter-house, the hands aboard

schooners and sloops, the craftsmen, the pioneer,

Lumbermen in their winter camp, daybreak in the

woods, stripes of snow on limbs of trees, the occasional snapping,

The glad clear sound of one’s own voice, the merry

song, the natural life of the woods, the strong day’s work…” 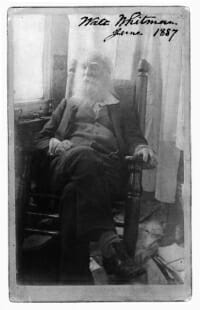 Walt Whitman in 1887, the year Wharton Esherick was born. Credit: Library of Congress.

On the shelf above Wharton’s bed, a copy of The Complete Poetry & Prose of Walt Whitman sits nestled between other great works Esherick especially loved to read; he always kept his favorite books within an arm’s reach of his bed. Among the stacks in his personal library are copies of Camden’s Compliment to Walt Whitman, Liberty in Literature: A Testimonial to Walt Whitman, and Notes on a Visit to Walt Whitman and a very well worn (the cover and binding have fallen off) copy of Leaves of Grass. It’s safe to say Esherick was a big fan of  Walt Whitman. If you’re familiar with Whitman’s work, especially with the poems in Leaves of Grass, it’s easy to see why Esherick was so drawn to Whitman’s writing. He felt connected to the themes in Whitman’s prose, especially Song of the Broad-Axe; the freedom from societal restraint, the description of makers and craftsmen, and of course the broad-axe itself, which was a favorite tool of Esherick’s when shaping large sculpture. Broad-Axe echoed Esherick’s life.

It’s no surprise then that in 1924 when Esherick was asked by Harold Mason of the Centaur Bookshop & Press in Philadelphia to illustrate their first publication, an edition of Song of the Broad-Axe, he wholeheartedly accepted. Delighted with the opportunity, he carved twelve 9″ x 10″ blocks to illustrate the poem. The book was released in 1924 in a limited run of 400 numbered copies, of which only 375 were for sale. The book was “printed upon a specially made pure rag paper of natural mellow colour…set by hand in one of the best modern revivals of fifteenth-century roman types used at Venice” (Centaur Press Announcement). The covers were adorned with woodcut illustrations of trees and Welcome Are All Earth’s Lands, a print not included in the book, graced the dust jacket.

After the release of the Centaur edition, Wharton began work on a special project of his own. He carefully laid out calligraphy and hand-lettered the poem. He used illuminated letters to begin paragraphs and filled the spaces at the end of the lines with simple line drawings in blue and yellow. The book was a one of a kind work of art on handmade paper, dedicated to his wife Letty. His partnership with Centaur would continue for many years to come and see the publication of several more books featuring his woodcuts including Reflections on the Death of a Porcupine, by D.H. Lawrence in 1924, Yokohama Garland and Other Poems by A.E. Coppard in 1926, and the Biblical account of the Song of Solomon in 1927. 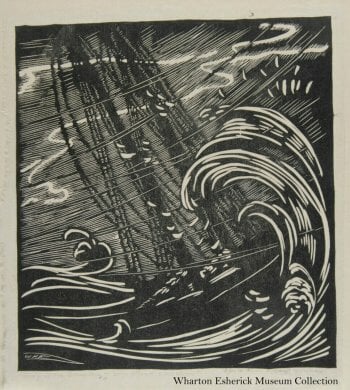 “Ships Struck in the Storm” from Song of the Broad-Axe

Broad-Axe was the first of two Walt Whitman publications Esherick illustrated. In 1927 he cut nine woodblocks to illustrate As I Watched the Ploughman Ploughing, a Whitman poem set to music by Philip Dalmas and printed by the Franklin Printing Company. The Centaur Bookshop distributed the two-hundred copies that were printed. Four of the woodcuts from this publication later appeared in the February 1929 issue of Vanity Fair. In his personal collection, Esherick kept several drafts and prototypes of the publication, including a tiny scaled version of the music book as he planned out which prints would go where. 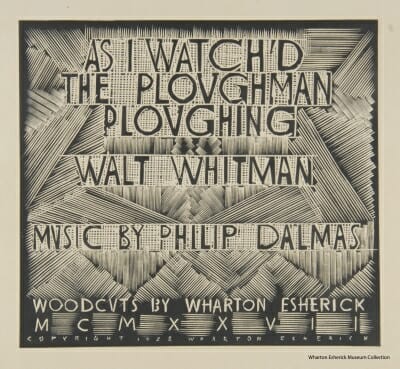 Title page of “As I Watched the Ploughman Ploughing”

Esherick eventually left printmaking behind as woodworking consumed his studio practice, but its influence remained. For the first time, Esherick saw success as an artist with his prints, producing roughly 350 relief prints in total, mostly during 1922-1934. While he left his legacy in sculpture and sculptural furniture, printmaking proved to be a pivotal period in his artistic career and the publication of The Centaur’s Song of the Broad-Axe played a major role in propelling him forward.

Friday, May 31, 2019 marks the 200th anniversary of Walt Whitman’s birth. To celebrate, the University of Pennsylvania Libraries Kislak Center organized a region-wide series of cultural events that include four new artistic commissions, a multitude of innovative exhibitions, performances, and programs initiated in conjunction with partner organizations across the Philadelphia and Camden region. While events take place all year, there is a focus on the two-week period, between May 24 and June 9, 2019, around Whitman’s birthday. We are proud to be participants in this celebration of Walt Whitman, the “Bard of Democracy” and the “Father of free-verse”. In addition to our summer exhibition which runs June 1 – September 1 in the Museum’s Visitor Center gallery, we’re also hosting two special literary tours, “Off the Shelf with Wharton Esherick” and are throwing a garden party where we’ll hear Song of the Broad-Axe read by none other than Walt Whitman himself – for more information visit our events page and come celebrate Whitman with us!

To learn more about Whitman at 200 visit: whitmanat200.org