New Discoveries in the Archives 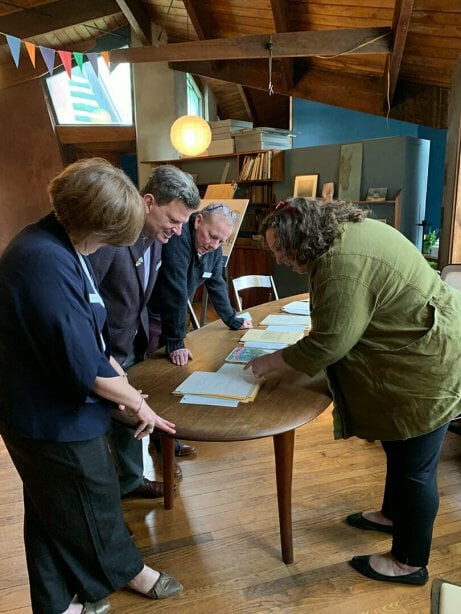 This September, Stories from the Archives opened in WEM’s Visitor Center. This installation showcases selected objects and works on paper from a cache of archival materials discovered in Esherick’s 1956 Workshop building in spring 2021. While we’re still in the midst of processing and learning about what these archives contain, we’re committed to sharing elements from them that deepen our understanding of Esherick’s life, legacy, and impact.

The objects currently on view at WEM give us insight into several stories that are important to understanding Esherick. Physical ephemera, like Esherick’s passport, help us paint a more detailed picture of the man himself, as do letters that show him in close correspondence with the people important in his life; in Stories from the Archives, we’ve focused on Esherick’s meaningful connection with the ceramist and sculptor Frans Wildenhain. Through materials related to the 1957 American Craft Council Conference at Asilomar and Esherick’s critical role there – a major turning point in the history of twentieth-century Studio Craft – we learn more about the public perception of Esherick’s place in one larger ecosystem of the art world, as well as his personal feelings about that role.

We shared some additional “finds” from the archives with the guests at our Creative Passport events in October (we’ll be hosting one more on November 14th if you missed them). These objects each tell additional stories about Esherick, and in their diversity, speak to the breadth of what’s available to be discovered in these archives. Here are a few favorites, especially for the insight they give us into Esherick’s story, character, relationship, and business practices. 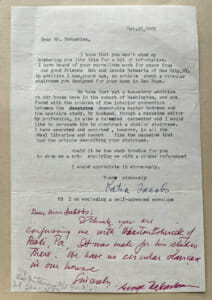 One of the most common questions we receive at WEM is whether Esherick and George Nakashima, also a Pennsylvania-based woodworker, knew each other – and what their relationship was like. While we know that Esherick and Nakashima were aware of the other’s work, we only have anecdotal evidence regarding the nature of their relationship, which wasn’t close. This newly discovered letter, however, directly connects the two men. In 1965, a potential client based in New City, New York – where Esherick had connections since the 1920s to artists including Henry Varnum Poor, whose Crow House is sited there –  wrote to Nakashima inquiring after “a circular staircase you designed for your home in New Hope” that she’d seen years ago. Handwritten in red ink on the typewritten letter is a brief note from Nakashima:

I think you are confusing me with Wharton Esherick of Paoli, Pa. It was made for his studio there. We have no circular staircase in our house.

While we don’t know how the letter made its way from Nakashima’s to Esherick, Wharton’s handwriting on the bottom of the letter notes two possible magazine articles to which the client might be referring. 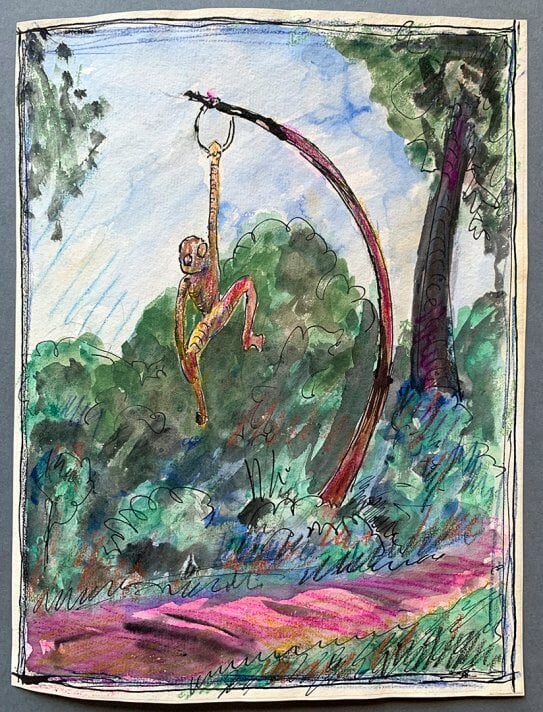 A Sculpture Proposal for the Philadelphia Zoo

This brilliantly colored drawing of one of Esherick’s monkeys, which visitors to the Studio will be familiar with, accompanies a series of correspondence focused on a proposal to the Zoo Sculpture Committee of the Fairmount Park Art Association from 1959. Esherick shares the kinds of animal sculptures he has made – and could make – with the committee, which did not end up awarding him the commission. Nonetheless, his final suggestion displayed Esherick’s trademark sense of fun and irreverence, if not his need for biological accuracy!

Or, to be amusing and abstract, I am wondering what kind of figure I would or could create if a giraffe mated with a hippopotamus – the offspring of such a union. What say?

Even though Esherick wasn’t selected, the committee tried to soften the blow by reminding Esherick of how busy he was with other clients and of his strength as an artist. 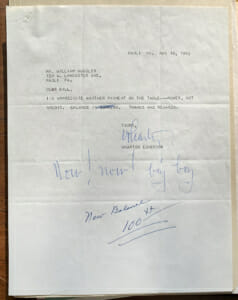 Esherick’s personality and openness with clients is also apparent through a series of correspondence from 1962 and 1963 with a client named Bill Huggler, who owned a Paoli Insurance Agency. Their back and forth regarding payment on an end table and the refinishing of a cocktail table not only includes Esherick asking for payment to be rendered before he goes to the hospital, since it would “help to have this,” but also Esherick hand-writing on a 1962 invoice letter “Now! Now! Big Boy!”

This humorous interjection on an otherwise formal letter gives a sense of what the relationship between the two men might have been like. Huggler also replies with similar cheekiness in his letters to Esherick, pointedly noting “I must have been drunk to have paid so much for repairs, namely 45. You owe me a table or something.”

These are just three stories, but there are so many more to uncover. If you’re a student or scholar interested in learning more about WEM’s archives, including our fully processed archival materials which have a finding aid available here, please connect with Emily Zilber at emily@whartonesherickmuseum.org. We are happy to support research requests as we can accommodate them, and love to see that work out in the world.

For example, curator Laura Igoe incorporated a document found during research at the museum into her current exhibition at the Michener Art Museum, Daring Design: The Impact of Three Women on Wharton Esherick’s Craft. To hear Igoe talk about that find, please see our recent Curator Conversation related to the exhibition, or visit the exhibition in person through February 6, 2022.

You can support our recent discoveries and help us process, house, and care for these materials, making them accessible for all, by making a donation today. Thank you for your generosity!