In the Kitchen with Wharton Esherick 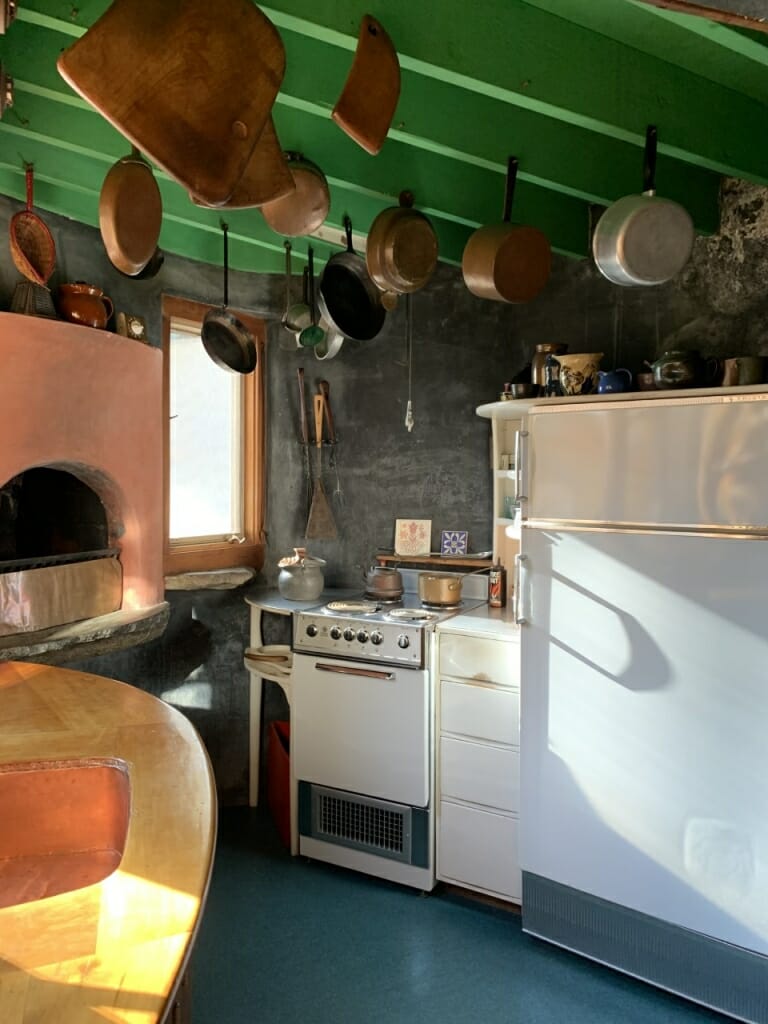 Written in 2016 by Dan Macey, this article originally accompanied an event for the friends and members of the Wharton Esherick Museum at the Margaret Esherick House in Chestnut Hill, hosted by Dan. 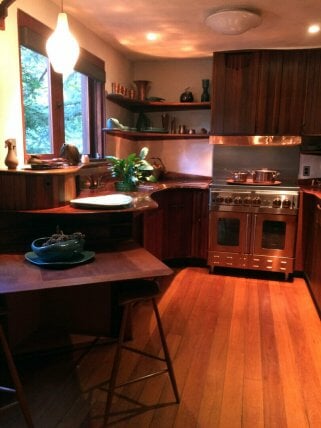 The kitchen Wharton designed for his niece, Margaret Esherick, as restored in 2015.

In 1960, master wood sculptor Wharton Esherick designed and constructed a kitchen for his niece Margaret Esherick in a house designed by his friend, world-renowned architect, Louis Kahn. Kahn and Esherick had previously collaborated on the studio for Wharton in 1958. Many people are surprised to learn of the friendship between Esherick and Kahn due to their apparent opposing design philosophies — Kahn’s designs are almost entirely geometric while Esherick is known for his organic work. And yet, somehow, through mutual respect and similar outgoing personalities, any conﬂict in aesthetic styles was so beautifully resolved in the kitchen of Margaret Esherick.

In late 2015, Paul Savidge and I completed a sixteen-month process of preserving and conserving Wharton’s kitchen in the Esherick house. With the assistance of former Museum Executive Director and Curator Paul Eisenhauer, and through some architectural archaeology, we were able to bring back much of the look of the kitchen as it was in 1961. We then proceeded to make the idiosyncratic space more useable to modern-day entertaining while celebrating Wharton’s artistry and craftsmanship. We were even able to acquire original Esherick stools once owned by Wharton’s son Peter to add to the kitchen designed for his cousin, Margaret. Adjacent to the Esherick kitchen, a new, modern kitchen was added to what was once the utility room. By containing most of the food preparation in the new kitchen, the Esherick designed kitchen is subject to less wear.

Prior to 1966 and the construction of the silo that contained a kitchen at the Wharton Esherick Studio, Wharton was known to make most of his meals in his ﬁreplace. He even designed his own version of a lap or “TV tray,” on which to eat. His most often prepared meal, according to many, was a steak and “baked” potato cooked right over the open ﬁre.

One clue to his interest in cooking is his well-thought-out and practical kitchen designed for both his own house and his niece’s. Both kitchens are designed with eﬃciency in mind as well as for optimal use of space. Wharton had already mastered the now well-established kitchen design philosophy of the “kitchen work triangle” between cooktop, kitchen, and refrigerator as well as maximizing the use of countertop and cabinet space. Storage drawers are not only easily opened but also removable to bring right to the table. It’s apparent that much thought went into the way in which the cook uses the kitchen and how food preparation occurs. In Margaret’s kitchen, he designed a ﬂip-top table which could be easily be extended for dining or even addition food preparation space or it could be ﬂipped down and out of the way to access the back door. 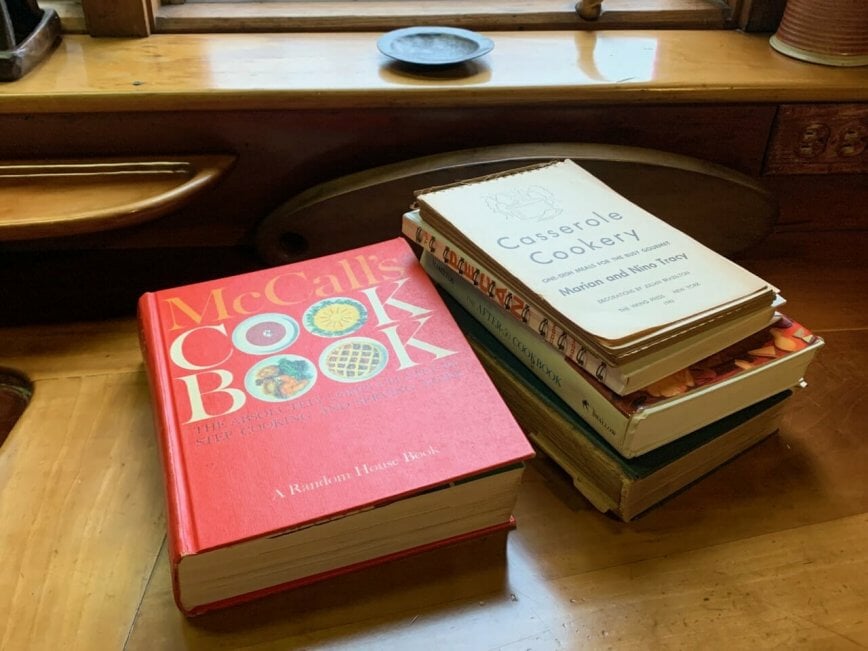 The few cookbooks in Wharton’s kitchen.

In his kitchen at the museum are only five cookbooks. One of which, the After 50 Cookbook, was inscribed after his death with an endearing message from Ruth and Bob Bascolm to Miriam Philips, Wharton’s companion, about enjoying cooking for one. “After any 50 of these recipes you should be rarin’ to take on another 50,” Ruth and Bob wrote for “Christmas 1977.”

The After 50 Cookbook by Donna Hamilton, is most notable for its large print, so aging eyes can read the recipes without the aid of any spectacles, I presume.

The other cookbooks found in his kitchen were the McCall’s Cookbook (1963), The Philly Cookbook of Town & Country: Famous Dishes and Celebrated Menus from Colonial Days to the Present (1963), By Anna Weatherill; Casserole Cookery: One Dish Meals for the Busy Gourmet (1950), by Marlan and Nino Tracy and The Pecan Cookbook, published in 1967. Of course, it is diﬃcult to gauge Wharton’s particular food or eating preferences simply by taking note of the cookbooks that he owned. (And while all were published during his lifetime, it is not out of the question that they were purchased or primarily used by Miriam.) What is interesting to a cook and lover of food like me is the hand-written and saved recipes that were stuck in some of the cookbooks — some used as bookmarks to mark possible favorite recipes in the book. Several of the recipes in what appears to be Wharton’s handwriting were for traditional delicatessen favorites — noodle kugel and whiteﬁsh salad. One was even written on the back of a membership solicitation card from the Jewish Museum in New York.

It’s interesting that several of the other “bookmarks” were promotional recipe booklets or “back-of-the-box” recipes for nuts, one for walnuts and several for pecans.

He apparently also had an inﬁnity for apples with a recipe for “French Apple Cobbler” bookmarked with a menu from the Dutchland Farmhouse Restaurant in Smoketown, Pa. and copy of a typed recipe for “Apple Dapple.”

It is a curious conscience that a lover of wood was also a lover of nuts and apples, which both are harvested from trees.

One other personalized bookmark was a very well-worn set of instructions and recipes for the “Flex Seal,” a once-popular pressure cooker. In Wharton’s own hand is a note to order a new gasket for the lid from the company then based in Chicago, Ill.

It is my pleasure that I include two of the recipes singled out by Wharton: 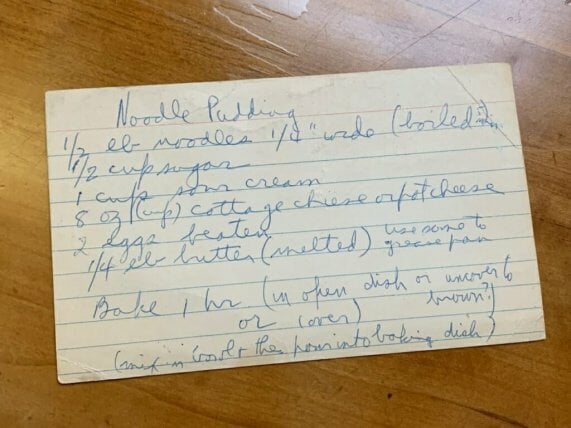 sliced white raisins (use judgment as to amount)

Bake for 1 hour in an open dish. 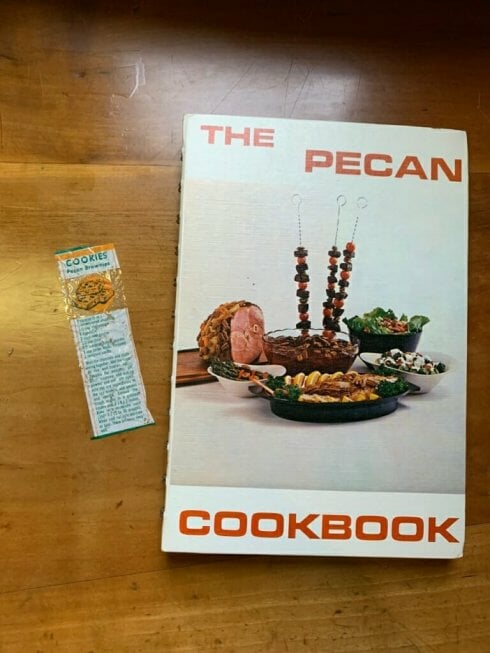 This pecan brownie recipe also served as a bookmark in The Pecan Cookbook.

Melt the chocolate and shortening together. Add the sugar to the well-beaten eggs; combine the mixtures. Sift ﬂour and then measure. Add baking powder and salt. Sift again. Add the dry ingredients to the egg mixture and then add pecans and vanilla. Spread the dough evenly in a greased square pan, 8×8”. Bake at 350 degrees, 25-30 minutes. When cool, cut into squares or bars. These brownies keep well.

Besides being one of the owners of the Margaret Esherick House, Dan Macey is also a celebrated commercial food stylist who prepares food for television shows, cookbooks, advertising, and food packaging. In addition, he is a food writer, contributing recently to Savoring Gotham, a food history encyclopedia of New York City and the upcoming Oxford Cheese Companion to be published in December 2016. Dan is on the board of Manitoga/The Russel Wright Design Center in Garrison, New York.