The Influence of German Expressionism On Filmmakers…and an Outhouse.

Halloween is upon us and we are excited to repost our November 2011 blog entry highlighting what some consider the first horror film, “The Cabinet of Dr. Caligari” – and answer the question: “What do Wharton Esherick and Tim Burton have in common?” 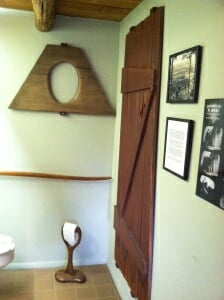 The Visitor Center bathroom at WEM 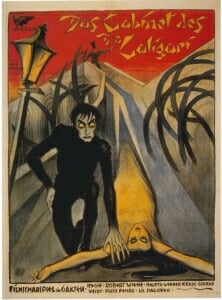 When museum-goers come into our Visitor’s Center, some of them usually make a beeline straight for our bathroom. Upon entry, most are surprised and delighted to see the door and seat of Wharton Esherick’s outhouse mounted on the walls. Inside the bathroom, visitors will see a photo of what the view looked like when sitting upon Wharton’s expressionist throne, and also a snippet about the influence that spawned its unique design:  the 1920 German Expressionist film The Cabinet of Dr. Caligari, or as the German’s call it, Das Kabinett des Dr. Caligari. Triangular in form, the walls of the outhouse taper inward as they rise to the top, where they ’re then capped by a sloping roof. Altogether, it closely resembles the cabinet from the film. The outhouse was constructed in 1927 and its 2008 reconstruction sits underneath the woodshed today.

The Cabinet of Dr. Caligari is one of the most influential German Expressionist films of all time, and one of the greatest silent horror films. Written by Hans Janowitz and Carl Mayer, and directed by Robert Wiene, the plot follows the investigation of several murders that happen in the German mountain village of Holstenwall. A carnival comes to town, and Dr. Caligari sets up his attraction: the somnambulist Cesare who can answer any question he is asked. The film’s narrator, Francis, and his friend Alan approach Cesare, and Alan asks how long he will live. Cesare responds by saying that Alan will live until dawn the next day. Cesare’s prediction is correct, and Alan becomes the first of several murders to shake the small town. As the film continues, it is discovered that Caligari is actually the director of a local insane asylum and what follows is what is considered to be the first “twist ending” in film. I don’t want to ruin it for you, so I’ll not reveal where the film goes from here, but believe me, this is worth watching. You can view the movie it in its entirety here. 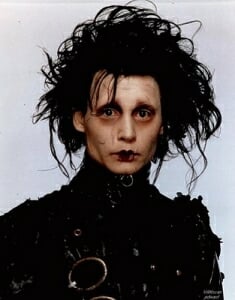 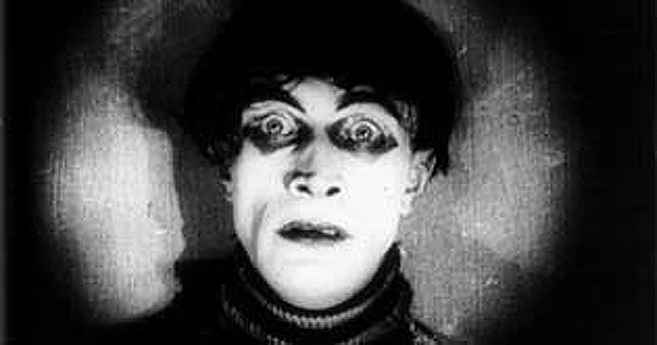 Conrad Veidt as Cesare the somnambulist in “The Cabinet of Dr. Caligari”

German Expressionism was one of several creative movements in Germany before WWI, influencing architecture, painting, printing, and cinema.  Expressionist films often used wildly non-realistic and geometrically absurd sets with designs painted on walls and floors to represent lights and shadows.  The plots of these films often dealt with madness, insanity and betrayal as well as other topics considered to be intellectual (as opposed to non-intellectual topics of action and romance). The influence of German Expressionism can be seen in American film as well.  Many German directors fled to America to escape the Nazis during WWII, and found their way to Hollywood.  Here horror and film noir genres received the greatest impact.

So how is an early 20th-century movement still affecting you today?  Well, in modern film culture, German Expressionism is best seen in writer/director Tim Burton, known for his crazy, quirky and outlandish films.  Batman Returns is cited as a modern attempt to capture the essence of German Expressionism. You can see for yourself by clicking here.  While you watch pay close attention to the use of light, but also keep an eye out for some wildly non-realistic costumes and sets!  German Expressionism is also seen in Burton’s 1990 film Edward Scissorhands, where Johnny Depp’s character looks like the long lost twin to Cesare from Dr. Caligari.  In his 1993 animated feature film The Nightmare Before Christmas, the animated settings greatly reflect the sets from Caligari with their twists, turns, and abrupt angles. 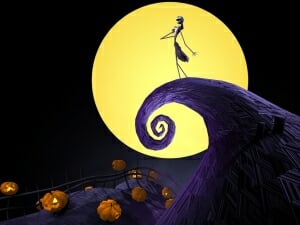 “The Nightmare Before Christmas”

Set design similarities between “The Cabinet of Dr. Caligari” and “The Nightmare Before Christmas”

All of this talk of film spawning from our quirky outhouse!  The whole staff at WEM highly recommends seeing The Cabinet of Dr. Caligari as well as many of the films and architecture it influenced.  After viewing it and then looking at the outhouse and the 1940 addition to the studio, the Expressionist influences jumped out at me and I appreciated them even more!  For me, it was easier to understand German Expressionism after viewing Dr. Caligari.  It’s one thing to read about the movement, but to see the films and the structures they inspire is another thing entirely! 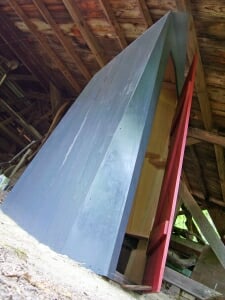 What Wharton and Tim Burton have in common should be clear now!  They were each inspired by The Cabinet of Dr. Caligari.  However, one followed a life of film, while the other followed a life of creative and wildly imaginative design, with a good dose of humor to boot!

Post written in 2011 by Curator and Program Director, Laura Heemer.

Check out Esherick’s Expressionist garage on our Collection Highlights page.

Book a tour and learn more about the influence of German Expressionism on Esherick’s work.